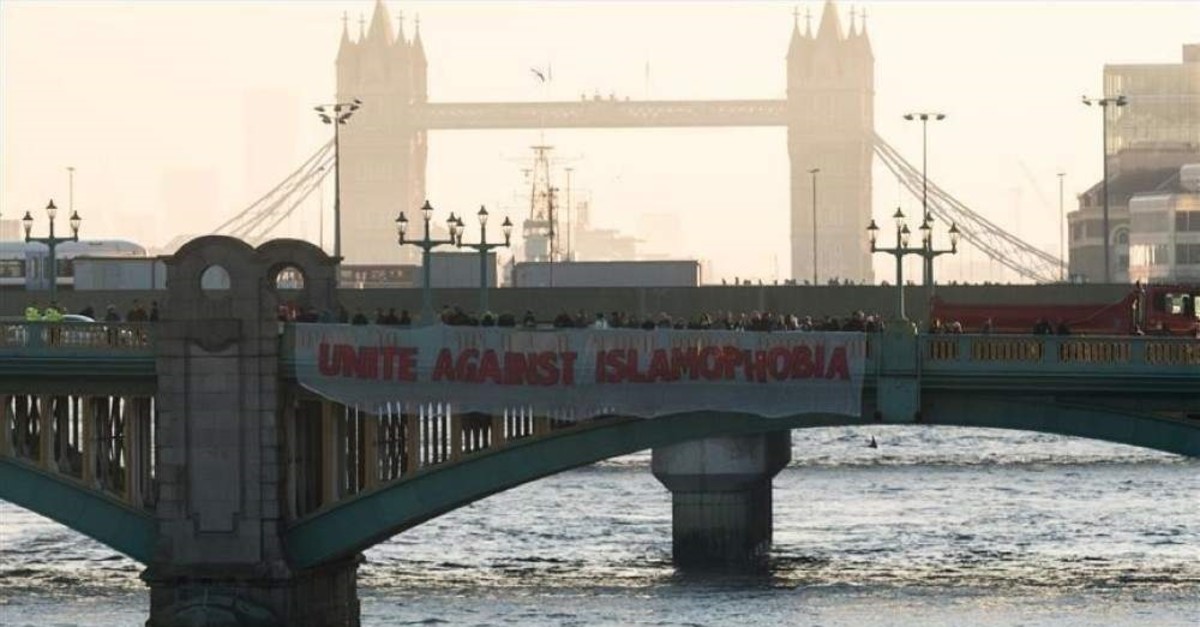 Amid an alarming rise in hatred toward Muslims in the U.K., another mosque has been vandalized in London with anti-Muslim slurs painted on a building close to the religious center

Amid increasing anti-Muslim hate crime in the U.K., a London mosque was the target of an anti-Muslim act earlier this week as slurs against Muslims were painted on a building close to the religious center.
Police were informed of the incident Wednesday. The slogans were spray-painted on a building close to the North Brixton Islamic Cultural Center located in the city’s south, the British public broadcaster BBC Turkish Service reported. The police said that they were working with the local authorities to remove the “offensive remarks” as soon as possible.

London Mayor Sadiq Khan shared a statement on his Twitter account, saying, "Disgusted to hear that Islamophobic slogans have been spray-painted near the North Brixton Islamic Centre.” He added that the criminals will face the full force of the law.
Investigations are ongoing as police launched a probe into the incident, citing “racism.”
Miqdaad Versi, from the Muslim Council of Britain (MCB), said it was "worrying to hear about this racist incident."
The U.K. has recorded a 375% increase in anti-Muslim attacks weeks after Prime Minister Boris Johnson made racist remarks in which he called veil-wearing women "letterboxes" and "bank robbers," according to a report released by Tell MAMA (Measuring Anti-Muslim Attacks), an anti-hate monitor, in September.
The anti-hate monitor reported that 38 hate attacks against Muslims were recorded in the following weeks after Johnson's remarks were published in the Daily Telegraph in August, compared to eight incidents the week prior.

"Of the 38 anti-Muslim hate incidents in the first week following Mr. Johnson's comments, 22 were directed at visibly Muslim women who wore the face veil [niqab] or other veiling practices. We recorded a total of 57 incidents in the three weeks following the column's publication, 32 of which were directed at visibly Muslim women," the report said.
In his column, Johnson said he opposed banning burqas and other face-covering garments but wrote that it was "absolutely ridiculous that people should choose to go around looking like letterboxes."
The issue was a hot pre-election debate as the MCB, the U.K.'s largest Muslim body, many times urged the Conservative Party leadership to tackle the issue of Islamophobia within the party and investigate Tories accused of it. Islamophobic comments by Tory party members and councilors were found online, with some calling for the bombing of mosques, and others making racist comments about Khan and Tory Home Secretary Sajid Javid.
According to the monitor’s other report released in March 2019, anti-Muslim attacks increased 600% across the U.K. after the terror attack in New Zealand’s Christchurch, which targeted Muslims. The report by Tell Mama that records and measures anti-Muslim attacks in the U.K. said that in the week after 50 Muslim worshippers were gunned down in New Zealand, offenders used “language, symbols or actions” linked to the atrocity to target Muslims in the U.K., which included “people making impressions of pointing a pistol to Muslim women and comments about British Muslims, and association with actions taken by the terrorist in New Zealand.”

In 2018, the U.K. was shaken by a letter calling on people to perpetrate violent crimes against the country's Muslim community as it advertised April 3 as a day of "violence against Muslims" in the country. The letter calls on people to attack Muslims in the form of verbal abuse or physical assault, such as by removing a woman's hijab or headscarf, or by throwing acid on them.

According to reports released in 2018, Britain is facing a new and significant threat from far-right terrorism. As the number of white Britons arrested on terrorism-related offenses increases, anti-Muslim hate crimes have skyrocketed by more than 500% following the May 22, 2017 concert suicide bombing in Manchester.

In 2016, some 4,400 religious hate crimes were carried out, a number that went up to 5,949 in 2017. The peculiar nature of the letter itself suggests that it is not, in fact, genuine and could spawn an organized internet campaign and stir up emotion within the populations of not only Britain but also the rest of the West. Significant factors included the June 2016 vote to leave the EU, a goal linked to curbing immigration in the eyes of some Brexit supporters, as well as a spate of attacks by militants in the first half of 2017.