Spain's Sanchez loses first bid to be confirmed as PM 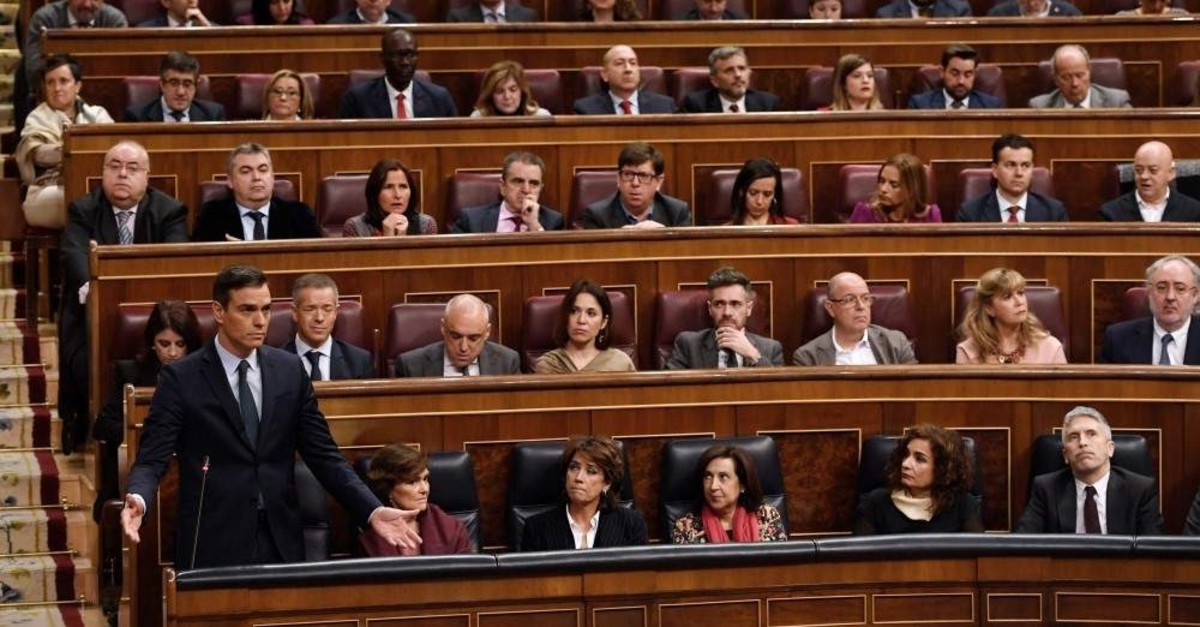 Spanish caretaker Prime Minister Pedro Sanchez speaks from his seat during the second day of a parliamentary investiture debate to vote for a premier at the Spanish Congress in Madrid on Jan. 5, 2020. (AFP Photo)
by Compiled from Wire Services Jan 05, 2020 5:15 pm

On Sunday, Spain's Socialist leader Pedro Sanchez failed in a first attempt to get Parliament's backing to form a government, leaving him two days to secure support to end an eight-month political gridlock.

Sanchez has been acting prime minister since a first inconclusive election in April and November did not produce a conclusive result. He needed an absolute majority of at least 176 votes in his favor in the 350-seat house to be confirmed as prime minister but failed to get it.

He obtained 166 votes in favor and 165 against, with 18 abstentions, while one lawmaker did not attend.

Tomorrow, Sanchez will only need a simple majority, more "yes" than "no" votes. He is likely to get that after securing a commitment from the 13 lawmakers of Catalonia's largest separatist party, Esquerra Republicana de Catalunya (ERC), to abstain.

The two parties together have 155 seats, short of a majority, so Sanchez is reliant on the votes of small regional parties.

In a sign of how close the race could be tomorrow, a member from the small regional party Coalicion Canaria, Ana Oramas, voted against Sanchez instead of abstaining as her party had agreed on Friday.

During Sunday morning's debate, Sanchez stressed that a Socialist-Podemos coalition would take a progressive approach.

Sanchez and Iglesias have claimed they will push for tax hikes on high-income earners and companies and also intend to roll back a labour reform passed by a previous conservative government.

Pedro Sanchez also said dialogue would be an "absolute priority" to resolve a conflict over Catalonia's independence drive and stressed the need to acknowledge the frustrations of both those in favor and against secession for the wealthy northeastern region.

The political situation in Catalonia remains in flux following a 2017 independence referendum which Madrid declared unconstitutional.

On the other hand, Popular Party (PP) leader Pablo Casado accused Sanchez of forming a "Frankenstein government" made up of "communists" and "separatists" who "want to put an end to Spain."

Until 2015, Spain had essentially a two-party system pitting the Socialists against the PP but the rise of new parties has led to a more fragmented Parliament that has made it harder to form a government.

Spain, the eurozone's fourth-largest economy, has been in political gridlock without a proper government for most of the past year after two inconclusive elections in April and November.