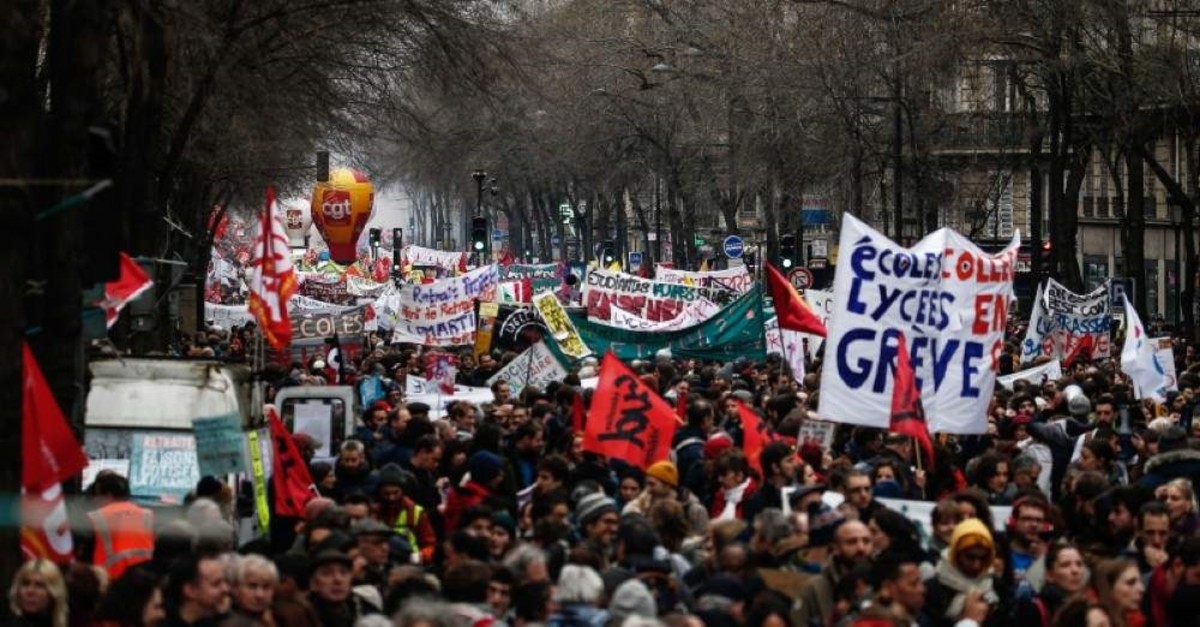 TOPSHOT - A picture shows a general view during a demonstration in Paris, on January 9, 2020, on the 36th day of a nationwide multi-sector strike against French government's pensions overhaul. (Photo by Abdulmonam EASSA / AFP)
by Jan 11, 2020 7:22 pm

France's government Saturday extended a hand to unions waging a crippling, weeks-long transport strike against pension reform, offering to withdraw the most contested proposal that would in effect have raised the retirement age by two years to 64.

The overture came as protesters clashed with police in Paris on the fifth day of mass demonstrations against the overhaul since December 5.

"To demonstrate my confidence in the social partners... I am willing to withdraw from the bill the short-term measure I had proposed" to set a so-called "pivot age" of 64 with effect from 2027, Prime Minister Edouard Philippe wrote in a letter to union leaders.

It came a day after they met seeking to end the labour action that has frustrated Paris commuters, ruined December holiday travel plans, and carved away at business bottom lines.

The moderate CFDT and UNSA unions welcomed Philippe's offer. The more hard-line CGT and FO unions have yet to respond.

Demonstrators in the capital, some masked and hooded, broke shop windows along their protest route Saturday, set fires and threw projectiles at police in riot gear, who responded with tear gas.

Several stores were ransacked as marchers brandished union flags and chanted defiantly: "We are still here!" and "Macron resign". Protests were also held in Marseille, Toulouse, Lyon and Nantes.

In one of President Emmanuel Macron's signature reforms, the government seeks to fuse 42 existing pension schemes into a single, points-based system it says will be fairer and more transparent but which unions fear will see millions work longer for a smaller retirement payout.

Particularly vexing was the proposal to impose the 64 "pivot age" that people would have to work until to qualify for a full pension -- two years beyond the official retirement age.

On Friday, Macron said that for the pension system to remain viable as a growing number of retirees live ever longer, "either one has to contribute more, or one has to agree to work a little longer", while insisting he does not want to see pensions lowered.

Philippe said the concept of an "age of equilibrium" would remain part of the reform, though he did not spell out what this means.

The premier also announced there would be a conference, as demanded by union leaders, to study ways of financing the pension system, which must come up with proposals by the end of April.

If it succeeds, MPs will be able to work the resulting proposals into the draft pension reform bill the government hopes to introduce to parliament by February 17.

If it fails, the government will take the "measures necessary to achieve equilibrium" in the system by 2027, the prime minister warned.

"We have had enough," estate agent Christophe Delvallee, 65, told AFP at the Aulnay-sous-Bois train station outside Paris. "It has been a month and a half. These are people with many advantages and employment guaranteed for life, and who are making life difficult for the rest of us."

His daily 75-minute commute to work now takes up to 2.5 hours.

Commuting has become a daily headache for many, with train services and Paris metro lines again curtailed Saturday, and regional and inter-city train numbers slashed.

The Paris rail operator RATP said after Philippe's announcement Saturday that all metro and suburban trains will run on Sunday, though still offering only partial service. Most rail workers are aligned to the CGT.

The Paris Opera, which was to launch its official new season on Saturday, cancelled its performance of The Barber of Seville due to opera workers' continuing participation in the strike.

Like railway workers at the forefront of the strike action, opera staff enjoy early retirement benefits under their sectoral pension scheme, and are reluctant to give these up. The Paris Opera says it has lost 12.3 million euros ($13.7 million).