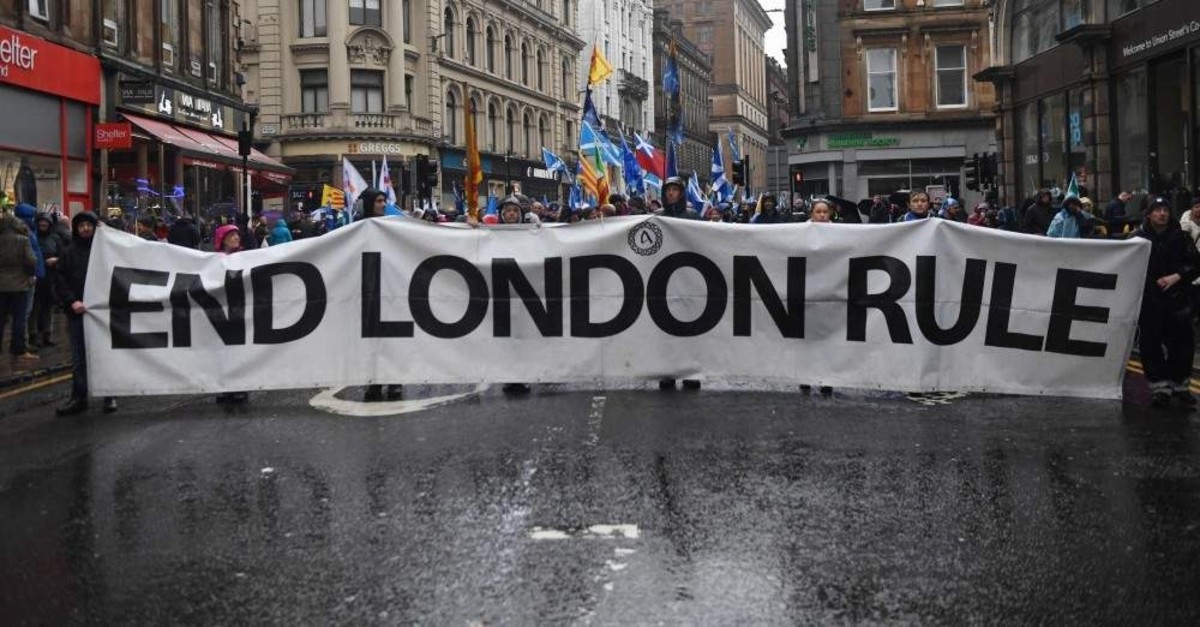 Pro-independence protesters hold up a long banner that reads ,End London Rule, during a march organized by the grassroots organization, All Under One Banner calling for Scottish independence, Glasgow, Jan. 11, 2020. Thousands of independence supporters are expected the march through the streets of Glasgow, despite a rally that was planned to conclude the event being cancelled after Met Office warnings of high winds. (Photo by ANDY BUCHANAN / AFP)
by Jan 12, 2020 6:14 pm

Thousands of activists braved bad weather on Saturday to join a march for independence in Glasgow, Scotland.

Activists leading the All Under One Banner march carried a huge banner reading "Scotland's right to choose," supporting the campaign for a referendum on Scottish independence later this year.

Scottish First Minister Nicola Sturgeon was unable to attend Saturday's march, however, claims the SNP has an "unarguable" mandate for a referendum after it won 48 of 59 Scottish seats in the British Parliament in last month's snap election.

Supported by the anti-Brexit Scottish National Party (SNP), All Under One Banner opposes Conservative Prime Minister Boris Johnson's plans to withdraw Britain from the EU.

Leaving the EU and ending EU citizens' freedom of movement to Britain "is not the future we contemplated when we considered the issue of independence in 2014," Sturgeon said in a speech in Norway last Friday.

The SNP argues that Brexit will take Scotland out of the EU single market and customs union against the will of its people.

In Scotland's first independence referendum in 2014, 55% voted to remain part of the U.K. Opinion polls suggest support for independence has risen since then.

In the 2016 Brexit referendum, 62% of Scottish voters opted to remain in the EU, while across Britain 52% voted for Brexit.