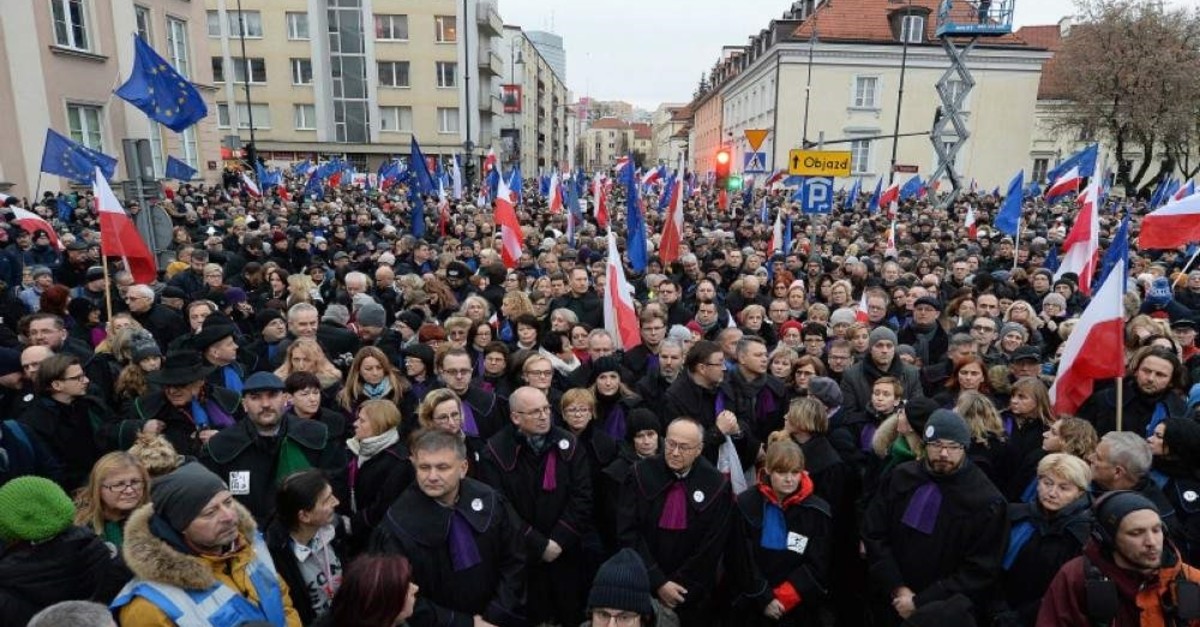 Judges and lawyers from across Europe, many of them dressed in their judicial robes, march silently in Warsaw, Poland, Saturday, Jan. 11, 2020. (AP Photo)
by Compiled from Wire Services Jan 15, 2020 9:31 am

The European Commission decided on Tuesday to ask the EU's top court to suspend the functioning of the disciplinary chamber of Poland's Supreme Court in a major blow to the eurosceptic Polish government, which immediately questioned the move.

"Today, the European Commission decided to ask the Court of Justice to impose interim measures on Poland, ordering it to suspend the functioning of the Disciplinary Chamber of the Supreme Court," the Commission said in a statement.

The Commission said its move was not linked to the new Polish draft law which has now cleared the lower chamber of parliament in which the Law and Justice (PiS) party has a majority. Poland's main judges' association says the draft law is intended to muzzle judges who question the legality of PiS changes to the judiciary.

Polish government spokesman Piotr Mueller said the EU has no power to order the European Court of Justice to make such a demand of member states.

The spat is the latest between the EU and Poland's conservative populist government, which has used its power over the past few years to gain greater control over the country's court system.

The EU says the laws being introduced by the Law and Justice Party erode judicial independence in Poland and blur the separation of powers between different arms of the state. A new chamber to discipline judges is only one of several disputed changes.

In a statement, the Commission noted that Poland's own Supreme Court last year "stated that the Disciplinary Chamber does not meet the requirements of EU law on judicial independence, and is therefore not an independent court within the meaning of EU law and of national law."

"Despite the judgments, the Disciplinary Chamber continues to operate, creating a risk of irreparable damage for Polish judges and increasing the chilling effect on the Polish judiciary," it said.

Vera Jourova, European Commission Vice-President for Values and Transparency, said in a tweet that the EU is "ready to engage in a constructive dialogue based on fairness and respect with Poland."

Amnesty International welcomed what it called a step "to halt abuse of Polish judges."

"The situation facing the Polish judiciary is incredibly grave," Eve Geddie, an official with the organization, said in a statement. "European intervention is vital to stop the Polish government's continued assault on the judges and prosecutors who are speaking out against the crackdown on their rights and freedoms."

On Saturday, judges traveled to Warsaw from across Europe in a show of solidarity with Polish judges protesting a bill that would allow the government to fire those who issue rulings that officials don't like. They marched silently through Warsaw, many dressed in their judicial robes.