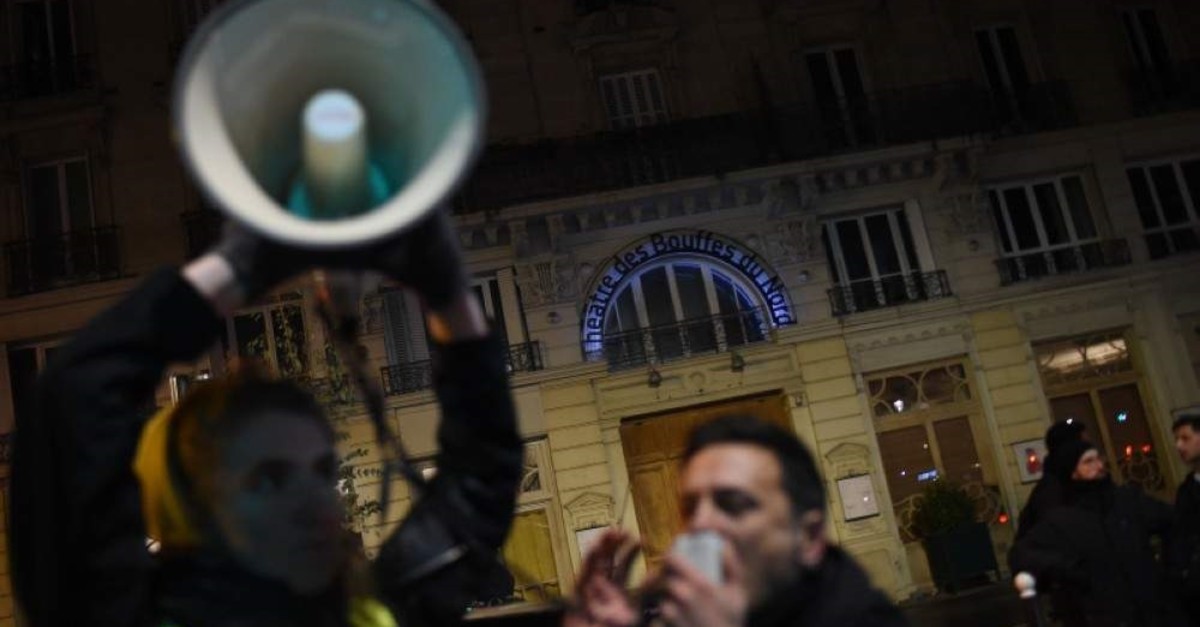 A protestor speaks into a megaphone during a demonstration in front of the Bouffes du Nord theater in Paris as French President Emmanuel Macron attends a play, Jan. 17, 2020. (AFP Photo)
by Daily Sabah with Agencies Jan 18, 2020 9:59 pm

Thousands of "yellow vest" anti-government protesters returned to the streets of Paris over the weekend, the latest of the weekly demonstrations held every Saturday by the movement since November 2018, which have been boosted by opposition to proposed pension reforms. French police fired tear gas under a rain of projectiles and arrested 32 people on Saturday following clashes with demonstrators.

Young people wearing masks shouted "revolution" as tear gas drifted by the Bastille, the square where the French Revolution erupted in 1789. "The street is ours," some protesters chanted. "Macron, we're going to come for you, in your home." On Friday, a group of anti-government protesters tried to enter a northern Paris theater late Friday while French President Emmanuel Macron was inside.

After six weeks of labor strikes and nationwide protests against government plans to overhaul France's pension system, some strikers have returned to work and train services that were severely disrupted by walkouts have seen notable improvements. However, more radical protesters are trying to keep the movement going. Last week, the French government offered a major concession to unions after talks between the government and trade unions to break the deadlock had failed, in a move aimed at ending strikes which are now in their fifth week.

The transport unions have joined forces with the yellow vests, who accuse Macron of ruling on behalf of an urban elite while ignoring people in the provinces and the countryside, many of whom struggle to make ends meet. The unions are looking for a second wind as their movement starts to flag, with the proportion of striking workers at national railway operator SNCF falling to less than 5% Friday. The UNSA union, the largest union for employees of the Paris public transport provider RATP, urged its supporters to join the next mass protest on Jan. 24.

The Louvre in Paris, the world's most visited museum, reopened Saturday after being shut down by workers opposed to the pension overhaul. On Friday, hundreds of disappointed visitors had massed outside the Louvre, some hurling insults at strikers who had blocked the entrance. It was the first time since the strike began on Dec. 5 that the museum had shut completely, although it was forced to close some galleries last month. There was no sign of an end to the strike at the Paris Opera, which has lost 14 million euros ($15 million) with the cancellation of 67 performances.