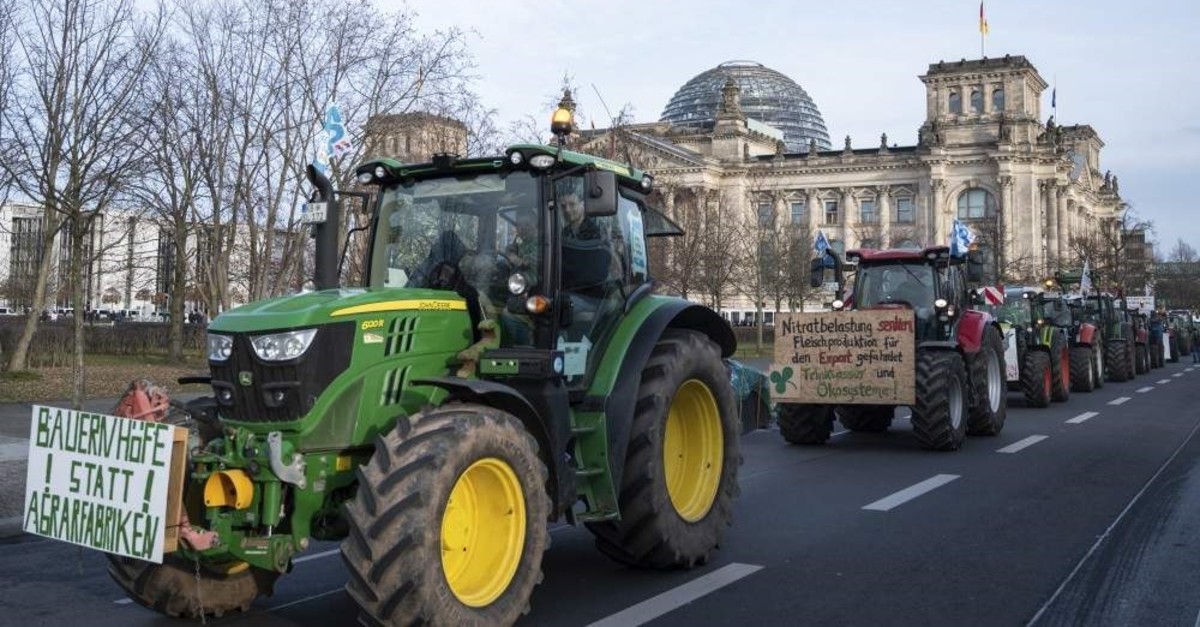 Farmers drive past the Reichstag building with their tractors in Berlin, Saturday, Jan.18, 2020. (AP Photo)
by Jan 18, 2020 6:57 pm
An estimated 27,000 people gathered in Berlin on Saturday to demand more environmentally-friendly agricultural policies on the sidelines of a major trade fair in the capital, organizers said.

Led by more than 150 tractors, a colorful procession of farmers, climate and animal activists and other groups began marching around midday from Berlin's Brandenburg Gate for the "Wir haben es satt!" ("We had enough!") protest.

The rally has become an annual fixture in the Berlin calendar, coinciding with International Green Week, a major agriculture and food fair that started on Friday. Some demonstrators carried posters demanding "Subsidies only for organics!" or preservation of biodiversity on German fields.

Police said the protest was peaceful, with no major incidents or disruptions.

"With the demonstration, we are again showing that there is a large social movement that wants a different agricultural policy," Germany's Green Party leader Robert Habeck said.

Habeck has called for a stop to selling food at dumping prices and called on the government to ban chick shredding and the castration of piglets without anaesthesia. Consumers of animal products, Habeck said, should be informed about the extent to which animal welfare is considered during production.

Parallel to the trade fair, government representatives from 70 countries were also attending an agricultural ministers' conference in the capital hosted by Agriculture Minister Julia Kloeckner. This year's protest coincides with heated debate in Germany over climate change and growing public awareness and participation in the Fridays for Future youth movement, founded by teen climate activist Greta Thunberg.

On Friday, farmers held their own demonstrations in a number of cities across Germany against stricter government regulations. Hundreds of tractors blocked the main boulevard through Berlin's central Tiergarten park.

German Environment Minister Svenja Schulze told a German newspaper on Saturday that farmers should receive more support, and that it's the European Union's duty to provide it. With the low prices for meat and milk, "farmers can hardly manage to protect the environment, provide clean drinking water and preserve biodiversity at the same time," she told the Neue Osnabruecker Zeitung newspaper, in light of the recent protests. "It's simply not possible to keep pushing prices down while demanding high quality and environmental protection at the same time."

"[It must be ensured] that our farmers receive enough money - also from the EU - so that they can fulfil these expectations," she said.
RELATED TOPICS