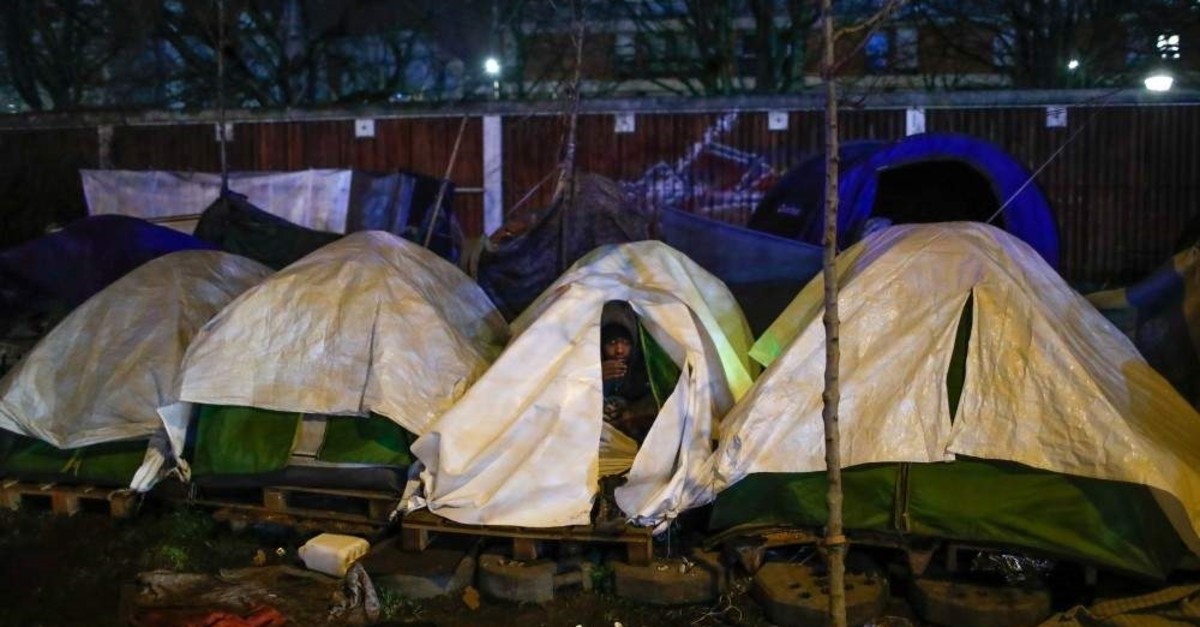 A migrant sits in his tent during the evacuation of a makeshift camp set up near the La Porte d'Aubervilliers, Paris, Jan. 28, 2020. (REUTERS Photo)
by Compiled from Wire Services Jan 28, 2020 2:10 pm

Police moved hundreds of migrants from a makeshift camp in northern Paris early Tuesday, the latest attempt to discourage asylum seekers from living in the streets of the French capital. It was the 60th major operation to clear migrant camps in or near Paris since 2015.

Police said 1,436 people, including 93 children and 1,187 single men, had been removed from the camp, where they had been living in tents and makeshift shelters along the Paris ring road. Dozens of camps have sprung up since the migrant influx to Europe that began in 2015, and some 20,000 people have been removed from camps in or near Paris in the past year.

The migrants appeared to be mainly from North Africa, the Middle East and Asia, many of them fleeing countries blighted by wars and poverty. Since the closure of a huge migrant camp in Calais in 2016, many refugees have moved to Paris. Authorities have repeatedly dismantled illegal campsites only to see them pop up again in different areas a few months later. The Aubervilliers site sprung up just two months after police had carried out a similar operation at two huge migrant tent camps in nearby sites in northern Paris.

Interior Minister Christophe Castaner had promised to clear all migrant camps from the city by the end of last year, in part by opening more shelters for asylum seekers but also by deporting those whose claims are rejected. Officials have said they were now deploying police to ensure migrants do not return to the razed camps or set up new ones. "We are not going to resume a never-ending cycle of evacuations followed by new installations," Paris police chief Didier Lallement told journalists at the scene.

But critics say that unless the government provides long-term lodgings or the prospect of legal residency, many migrants will avoid administrative centers and return to the streets. Some 300 people had already set up tents just a few hundred meters away from the razed camp. President Emmanuel Macron said last year that France must end its "lax" approach to immigration.