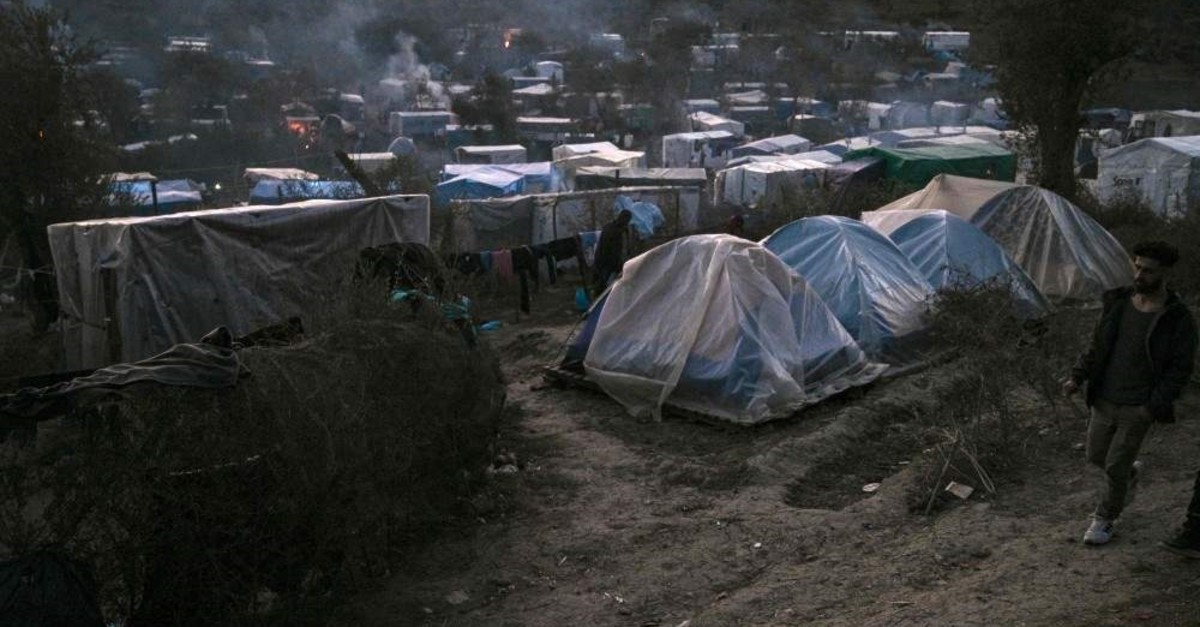 A dog runs past tents at the makeshift camp next to the Moria refugee camp on the Greek island of Lesbos, Jan. 22, 2020. (AFP)
by Daily Sabah with AP Jan 29, 2020 8:20 pm
Greece is planning to use a floating barrier to stop migrants from reaching the Greek islands from the nearby coast of Turkey.
The Defense Ministry has invited private contractors to bid on supplying a 2.7-kilometer-long floating fence within three months, according to information available on a government procurement website Wednesday. No details were given on when the barrier might be installed.
A resurgence in the number of migrants and refugees arriving by sea to Lesbos and other eastern Greek islands has caused severe overcrowding at refugee camps.
The netted barrier would rise 50 centimeters above water and be designed to hold flashing lights, the submission said. The Defense Ministry estimates the project will cost 500,000 euros ($550,000), which includes four years of maintenance.
Greece's six-month-old center-right government has promised to take a tougher line on the migration crisis and plans to set up detention facilities for migrants denied asylum and to speed up deportations back to Turkey.
Nearly 60,000 migrants and refugees made the crossing to the islands last year, nearly double the number recorded in 2018, according to data from the United Nations' refugee agency.
To reduce the number of illegal migrants on the dangerous Aegean Sea route, Turkey and the European Union signed an agreement in 2016. The deal stipulates that Greece is to send migrants held on its Aegean islands back to Turkey. In return, Turkey is to send Syrian migrants it hosts to various European Union countries.
According to the deal, Turkey was promised a total of 6 billion euros in financial aid, which was initially designed to be given to the country in two stages and be used by the Turkish government to finance projects for Syrian refugees. Visa freedom for Turkish citizens was also to be provided under the agreement. Lastly, the customs union was also to be updated in accordance with the deal.
In exchange for these promises, Turkey took the responsibility of discouraging irregular migration through the Aegean Sea by taking stricter measures against human traffickers and improving the conditions of more than 3 million Syrians living in Turkey.
Despite significant developments in the control of migration traffic, the EU has not delivered on its commitments.
Turkey and Greece have been key transit points for irregular migrants aiming to cross to Europe to start new lives, especially those fleeing war and persecution.
Adalbert Jahnz, a spokesman for the European Commission, on Thursday warned that any planned Greek sea barriers to deter migrants must not block access for asylum seekers while noting that the EU executive has not seen the proposals.

"The installation of barriers is not in of itself contrary to EU law," the commission spokesman said. "Such types of barrier or physical obstacles must not make access to the asylum procedure impossible for those who may potentially need it."

EU member states must also respect the principle of non-refoulment, under which asylum seekers must not be sent back to a country where they would be in danger of persecution, Jahnz noted, adding that any measures must be proportional.

The commission will be in contact with Athens to get more details on the proposal and its aims, the spokesman added.