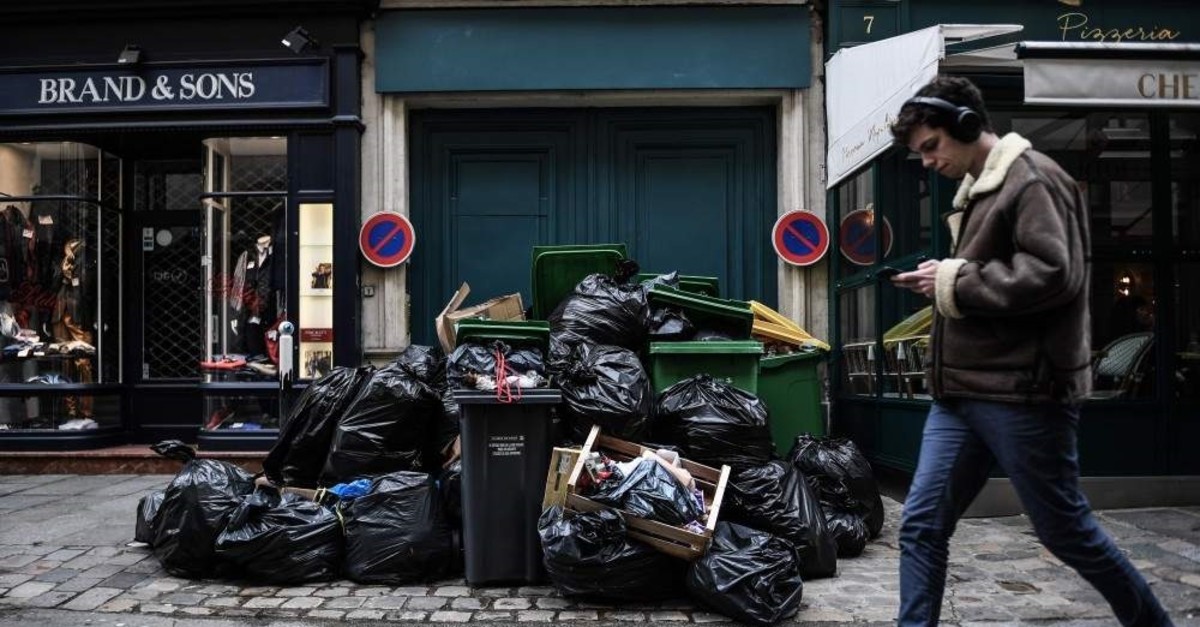 A man walks past garbage piled in a street of Paris following the blockade of incinerators around the French capital, Feb. 3, 2020. (AFP Photo)
by Daily Sabah with AFP Feb 03, 2020 8:39 pm

France's trains may be running again but the whiff of discontent over the government's pension reforms still hangs thick in the air as a waste disposal strike begins to bite. Sidewalks in several parts of Paris have become obstacle courses of overflowing trash bins after 10 days of blockades at the city's incineration plants. Six of seven incinerators used to burn the capital's trash have been brought to a halt by the strike, the agency in charge of the city's household waste said, leaving rubbish going uncollected for days in several areas.

In a city where public parks have battled rodent infestations in recent years, the trash pileups have raised public health concerns. Many Parisians took to social media and asked the government to intervene.

In the southern port city of Marseille, where workers have been blocking waste-sorting centers for the past 10 days, some 3,000 tons of garbage have piled up in the streets, according to local authorities. The city has required unions to provide a minimum level of service and placed garbage bins out for residents to stop them from dumping their trash directly on the street. Waste collectors are up in arms over the government's plans to fuse 42 different pension schemes, including the early retirement plans enjoyed by train drivers, Paris Opera employees and several other groups, into a single points-based system. Garbage collectors argue that they should continue to be allowed to stop work early because their life expectancy is seven years less than the average French person.

France has been gripped by protests and strikes since Dec. 5 over President Emmanuel Macron's controversial pension reform plans. The French government’s deepest concern seems to be the possibility of these events snowballing into a continuation of the yellow vest movement by reigniting it.

Despite a series of concessions, including a pledge to police, pilots and many transport workers that they will still be able to stop working before the official retirement age, the Macron government has largely held firm with a reform promised by Macron during his 2017 presidential campaign. He says the new system will be more transparent and fairer, in particular to women and low-income workers such as farmers. Macron also appears determined to succeed where previous governments have failed when tackling France's sprawling pension system.