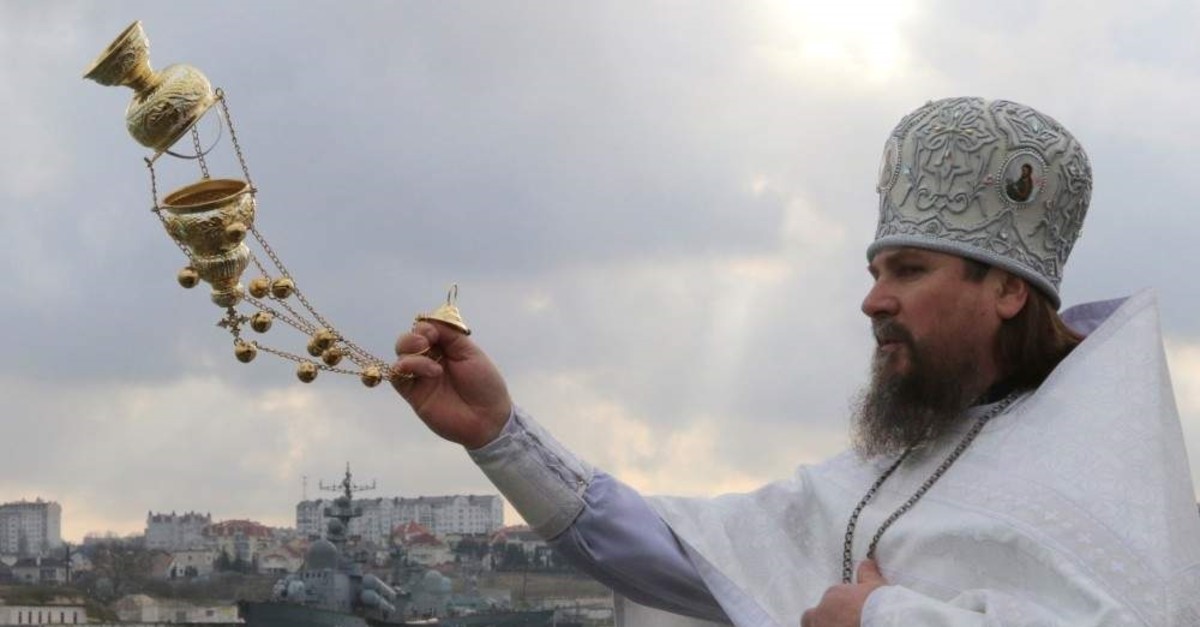 A priest conducts a service on the Karantinnaya Bay coast during celebrations of the Orthodox Christian feast of Epiphany, with Russian naval ships seen in the background, in Sevastopol, occupied Crimea, Ukraine, Jan. 19, 2019. (Reuters Photo)
by Feb 04, 2020 9:55 pm

The Russian Orthodox Church has proposed to stop the practice of having priests bless weapons of mass destruction, though the sprinkling of holy water onto planes and ships was still deemed appropriate.

The Church on Monday published a draft document outlining its role in blessing Orthodox Christians who "protect the Fatherland" and "carry out their military duty," inviting internet users to discuss the proposal online.

Russians often ask priests to bless anything from new cars and flats to Soyuz spaceships in the belief that the gesture bestows divine protection.

Since the fall of the Soviet Union, priests have also begun blessing troops, planes and ships, and all sorts of weapons, from Kalashnikov rifles to nuclear-capable Iskander ballistic missiles.

But the document proposed that "blessing any type of weapons the usage of which can inflict an indefinite number of deaths, including weapons with indiscriminate effects or weapons of mass destruction... be removed from pastoral practice."

At the same time, it remains "appropriate" to "bless transport used by soldiers on land, water and in the air," to ask God to protect the men using them, it said.

The Russian military has forged ever-closer ties to the Church under Defense Minister Sergei Shoigu, who is overseeing the construction of a huge cathedral for Russia's armed forces outside Moscow.

It is to be opened on May 9, the 75th anniversary of the Soviet victory over Nazi Germany in what Russia refers to as the Great Patriotic War.

Since 2010, the military has inducted priests into its ranks, including an airborne unit that can deploy mobile inflatable chapels.