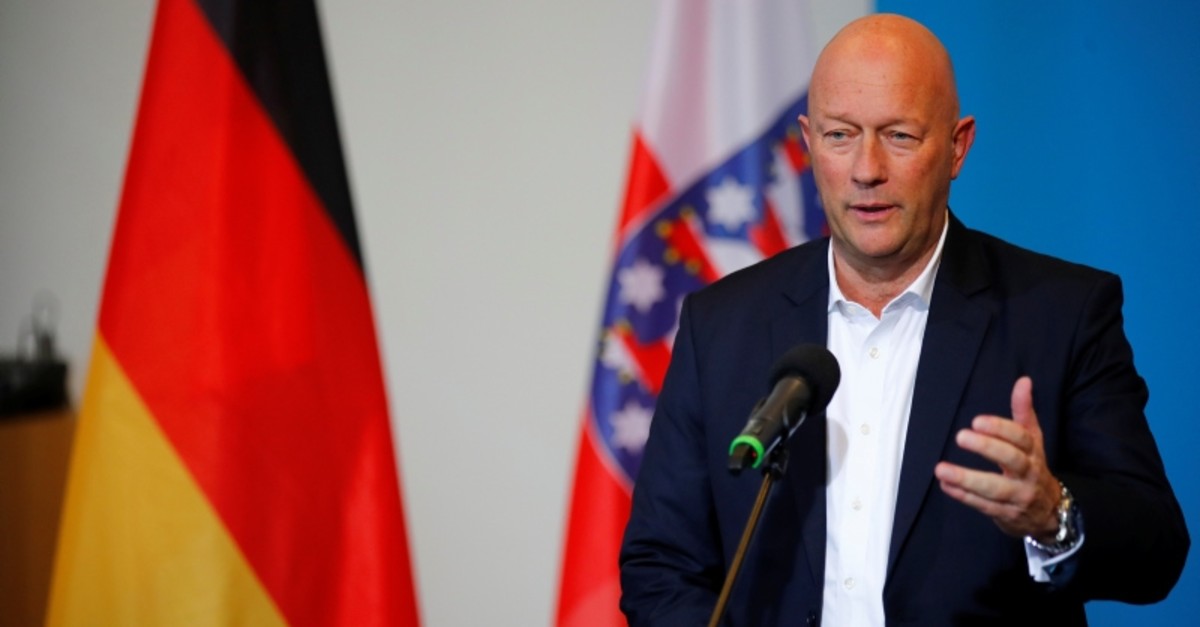 Thomas Kemmerich, the liberal candidate just elected as premier in the German state of Thuringia, said Thursday he is resigning, describing the move as "inevitable."

Kemmerich said in the state capital Erfurt that he was giving up the post he had been elected to Wednesday – with the controversial support of the far-right Alternative for Germany (AfD) – and that "the resignation was inevitable."

Kemmerich's Free Democrats (FDP) party had also initiated a motion seeking to dissolve the assembly in the eastern German state, which would pave the way for new elections there. A two-thirds majority is needed to dissolve the parliament.

Left-leaning parties accused their rivals of breaking a taboo by allowing the AfD, which is particularly strong in the ex-communist east, to help put a center-right candidate in power in Thuringia state – the first time that has happened.

The national leadership of Chancellor Angela Merkel's center-right Christian Democratic Union (CDU), whose regional lawmakers also elected Kemmerich, called for fresh regional elections as a way out of the crisis, a call echoed by other mainstream parties.

The party's general secretary, Paul Ziemiak, said Wednesday's decision "divides our whole country” and was made worse by the fact that CDU lawmakers made it possible for a premier to be elected "with the votes of Nazis as well.” National leader Annegret Kramp-Karrenbauer said the party's regional lawmakers had acted "against the recommendations, demands and requests” of leaders in Berlin. "This is a bad day for Thuringia, a bad day for Germany," she said in the French city of Strasbourg.

The FDP only just secured enough support to enter the state legislature in an October election, but Kemmerich threw his hat in the ring after left-wing incumbent Bodo Ramelow failed to secure a majority during two rounds of voting by lawmakers.

Kemmerich ousted Ramelow in a 45-44 vote, with one abstention. AfD, the second-strongest party in Thuringia, fielded a candidate of its own but then ended up supporting Kemmerich in the final vote. The CDU, a traditional ally of the FDP, also backed him and did not field its own candidate.

"This is the first time in the history of modern Germany that a state premier has been elected with AfD votes," Political Scientist Andre Brodocz told broadcaster MDR.

Media were quick to describe the event as a "political earthquake," as mainstream parties had so far refused to countenance working with anti-immigration, anti-Islam and anti-EU AfD at any level.

The result drew withering criticism from left-leaning parties. Norbert Walter-Borjans, a leader of the Social Democrats – the junior partner in Merkel's national government – described it as "inexcusable" and "a scandal of the first order.”

"What has happened in Thuringia is not just a matter for Thuringia" but for federal politics too, he told broadcaster ZDF.

AfD's Thuringia branch has a particularly radical reputation and its regional leader, Bjoern Hoecke, is its best-known far-right firebrand. He has come under scrutiny from Germany's domestic intelligence agency.

The party entered Germany's national parliament in 2017, strengthened by the migrant influx of the previous two years. Polls show its national support steady at between 11-15%. Mainstream parties, particularly those on the right, have long struggled to find a way to push down its support, but their national leaders have been clear that they won't work with it.

The popular Ramelow had hoped to continue as state premier leading the same three-party, left-leaning coalition he headed for the past five years.

But that coalition lost its majority in the October election. That created a stalemate as no one wanted to form a coalition with AfD, and Merkel's Christian Democrats also wouldn't work with Ramelow's Left Party, which is in part a descendant of East Germany's ruling communists.

It wasn't immediately clear whether Kemmerich would be able to form a viable government. To a backdrop of heckling, he told lawmakers in Erfurt that "the firewalls against the extremes will stand.” He pledged to form a "competent and diverse” Cabinet and called on parties in the center to work with him. He said he would not make any offer to AfD.

Hoecke said Thuringia had been "deformed into a left-wing state” under Ramelow and that had to be ended.

The Christian Democrats' regional leader, Mike Mohring, said his party had supported Kemmerich as the center-right candidate and wasn't responsible for how other parties voted.

In Berlin, Ziemiak said that "today's election, with AfD's votes, is not a basis for a stable government.” He added that "there can be no government with the CDU on the basis of AfD's approval. The best thing for Thuringia would be new elections.”

Kemmerich's election was greeted with reservations even by some in his own party, which is in opposition nationally but has been part of many past German governments.

A prominent federal lawmaker with his FDP, Marie-Agnes Strack-Zimmermann, tweeted that she personally appreciates Kemmerich "but allowing oneself to be elected by someone like Hoecke is unacceptable and intolerable among democrats.”

AfD co-leader Joerg Meuthen told the Frankfurter Allgemeine daily the vote showed there was "less distance" between the CDU, FDP and AfD than other parties.

Central Council of Jews in Germany President Josef Schuster said he was "horrified" by the vote outcome.