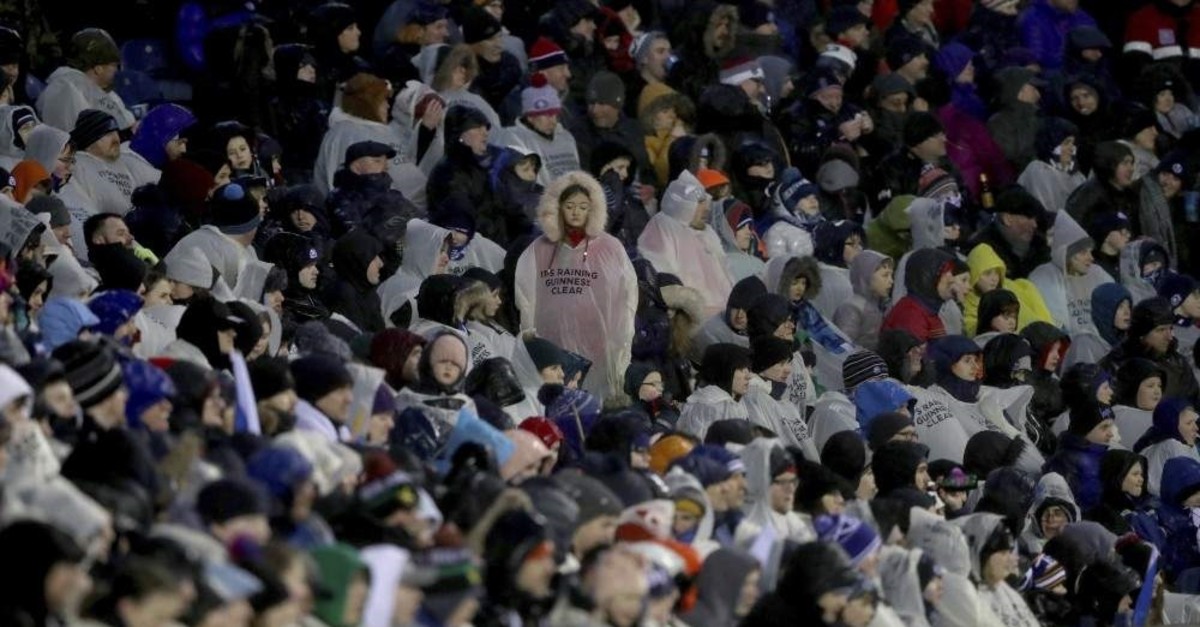 The crowd cover up from the rain as Storm Ciara hits during the Six Nations rugby union international match between Scotland and England at Murrayfield Stadium, in Edinburgh, Scotland, Feb. 8, 2020. (AP Photo)
by Feb 09, 2020 5:12 pm

Britain and Ireland were lashed by howling winds and inundated with driving rain Sunday as Storm Ciara left homes without power, wiped out sports events and disrupted travel around northwestern Europe.

The bad weather also hit France, Belgium, the Netherlands, Switzerland and Germany throughout Sunday, causing scores of flights to be cancelled.

In Britain, more than 30,000 homes were left without power, largely in eastern England.

The highest wind speed recorded was 93 miles (150 kilometres) per hour at Aberdaron, on the tip of northwest Wales's Llyn peninsula.

In the central Scottish city of Perth, three people were injured after part of a pub roof collapsed on Saturday.

The English Premier League fixture between champions Manchester City and strugglers West Ham was called off due to "extreme and escalating weather conditions", City said in a statement.

The entire Women's Super League football programme was called off, including derbies between Arsenal and Tottenham, and Everton and Liverpool.

The north London clash was a sell-out, while the latter was due to attract a 20,000-plus crowd to Goodison Park.

In London, organisers cancelled a 10-kilometre race in which 25,000 runners were due to take part, while major city parks closed.

In rugby league, both Super League fixtures were postponed.

Meanwhile, Queen Elizabeth II, staying at her Sandringham country residence in eastern England, did not go to church due to the high winds. The 93-year-old is the supreme governor of the Church of England.

About 120 flights to and from Amsterdam Schiphol, the third-busiest airport in Europe, were cancelled, largely affecting KLM, British Airways, easyJet and Lufthansa services.

Several airports in Germany had to cancel flights as the storm swept in from the north.

Frankfurt, Berlin, Munich, Cologne and Hanover were among those affected, while at Dusseldorf, 111 flights were scrapped on Sunday.

In Belgium, the Royal Meteorological Institute issued an alert for Sunday of winds reaching 130 kph, or more, with the risk of property damage nationwide.

Some 60 flights departing or arriving at Brussels Airport have been cancelled as a precaution, according to an airport spokesman, who said further delays were possible.

In Ireland, around 14,000 homes and businesses were without power, national broadcaster RTE said, as the republic began counting ballots in its general election.

"Storm Ciara will continue to produce very strong west to southwest winds over Ireland with mean speeds of 50-65 kph and gusts generally of between 90 and 110 kph, higher in Atlantic coastal areas," it said.

"A combination of spring tides and high seas will result in a significant risk of coastal flooding."

Earlier French forecaster Marion Pirat told AFP that high winds were expected in the north and northwest of the country, potentially strengthening to 120 kph overnight Sunday. In the Vosges, winds could hit speeds of 140 kph.

The storm could make tough going for the Six Nations rugby clash between France and visitors Italy at 1600 GMT at the Stade de France in Paris.

The Dutch Football Association announced that Sunday's four top-flight matches had been postponed, while the Belgian top division also called off its matches.