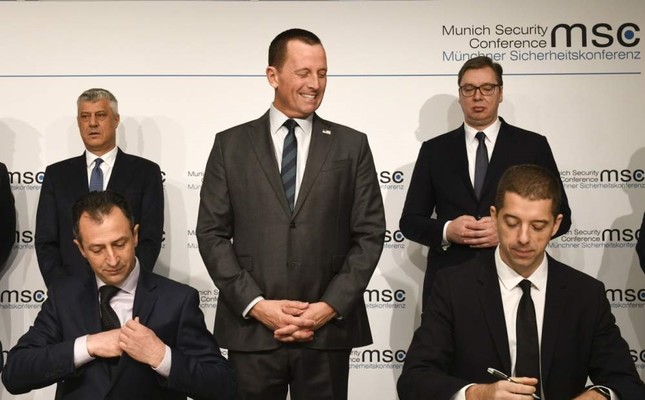 U.S. Ambassador to Germany Richard Grenell (C), the President of Kosovo, Hashim Thaci (on the left in the back), and Serbia Aleksandar Vucic (on the right in the back) watch the signing of an agreement between Kosovo and Serbia for railway and street projects at the Munich Security Conference (MSC), Munich, Feb. 14, 2020. (AFP Photo)

Serbia and its former province Kosovo on Friday signed an agreement to restore a railway connection between them under U.S. mediation in a step toward normalizing their relations. Serbian President Aleksandar Vucic and Kosovo's president, Hashim Thaci, both attended the signing ceremony, held on the margins of the Munich Security Conference in southern Germany. The two sides also signed a memorandum of interest on the construction of a highway linking Belgrade with Pristina. That follows a Jan. 20 agreement on the restoration of flights between the two capitals.

Serbia lost control of Kosovo after the NATO bombing in 1999 to drive out Serb forces following a counter-insurgency in which more than 13,000 people, mainly Kosovo Albanians, were killed. Kosovo declared independence from Serbia in 2008; however, Belgrade does not recognize its independence, and the two have not normalized ties. An EU-mediated dialogue between Serbia and Kosovo over normalizing ties was initiated after the previous Kosovo government imposed 100% taxes on Serbian goods in protest of Serbia's blockade of Kosovo in the International Red Cross and other international organizations. Belgrade, which still considers Kosovo part of its territory, said it will not return to the negotiating table until the tariffs are lifted.

Kosovo has now been recognized by more than 110 countries, including the U.S., but not by Serbia, Russia or China. The U.S. and the EU have encouraged Serbia and Kosovo to normalize relations. If they do, Kosovo would be able to apply for membership in the U.N., a move that Serbia's old ally Russia is currently blocking.