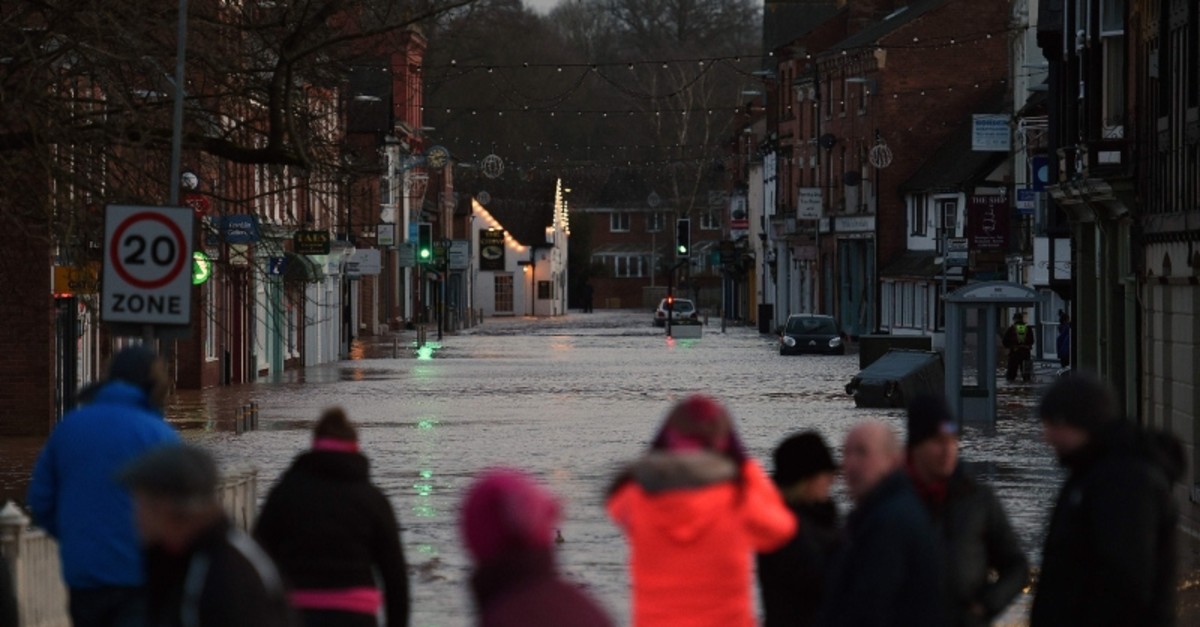 People look at flood water in a flooded street in Tenbury Wells, after the River Teme burst its banks in western England, on February 16, 2020, after Storm Dennis caused flooding across large swathes of Britain. (AFP Photo)
by Associated Press Feb 16, 2020 10:08 pm

Storm Dennis hammered Britain Sunday, bringing a month's worth of rain in just 48 hours to parts of South Wales, which bore the brunt of the country's second severe storm inside a week.

Rivers across Britain burst their banks and several severe flood warnings remained in place as authorities strove to get people to safety and to protect homes and businesses. The Met Office, Britain's meteorological service, said the disruption is set to carry through into Monday.

Major incidents have been declared in several areas in England and Wales as authorities mobilized resources to deal with the impact of the overflowing rivers that have cut off some communities.

A man in his 60s died after falling into the River Tawe in South Wales mid-morning and his body was found further along the river, Dyfed-Powys Police said on social media. Police said his death was not being treated as suspicious or being linked to the bad weather.

On Saturday, Storm Dennis was blamed for the deaths of two men who were pulled from the sea in separate searches off England's southeastern coast.

Dennis has been so intense that England posted a record number of flood warnings and alerts and a rare "red warning" for extremely life-threatening flooding was announced for South Wales.

The Met Office, Britain's meteorological service, only issues its highest red warning when it thinks the weather will be so dangerous there's a "risk to life" and that people must take immediate action to protect themselves. It was the first time a red warning has been sounded since December 2015.

Though the warning only lasted a few hours, South Wales Police declared a major incident as firefighters and rescue crews continued to help communities following multiple floods, landslides and evacuations. Nearby Gwent Police said residents of Skenfrith, Monmouthshire, were being advised to evacuate due to the flooding.

The Met Office said the highest wind gust recorded was 146 kph at Aberdaron in North Wales on Saturday. It also said a total of 157.6 millimeters of rain fell at the Crai Reservoir in the Welsh county of Powys over 48 hours to Sunday morning. One of the worst-hit areas in South Wales was the village of Nantgarw, Rhondda Cynon Taff, near Cardiff, which saw entire streets left underwater since the early hours of Sunday morning.

As the wet and windy weather started to clear across parts of the south and headed north and eastwards, the number of flood warnings across the U.K. declined but there were still around 360 of them in place Sunday, from the north of Scotland through to Cornwall in southwest England.

John Curtin, the executive director of flood and coastal risk management at the Environment Agency, said in a tweet that at one point during the day, England had the most flood warnings and lower-level alerts in force - 594 - than on any other day on record.

Flood warnings could remain in place for a while since much of Britain is still saturated from last week's Storm Ciara, which left eight people dead across Europe.

Curtin from the Environment Agency said in a tweet that the "high but not exceptional" rainfall figures of the past 24 hours show how the legacy of Storm Ciara has "driven the widespread significant flooding we're seeing."

Army personnel have been seconded to assist people in areas of West Yorkshire that were badly hit by flooding during last weekend's Storm Ciara.

The British Red Cross said that with water levels expected to peak on Monday or Tuesday it was ready to respond across the country.

There were transport disruptions too, with hundreds of flights canceled due to the high winds while train services were repeatedly disrupted by flooding. Tens of thousands of passengers were being affected on what is a major travel weekend for British families as many schools close for a mid-winter break.