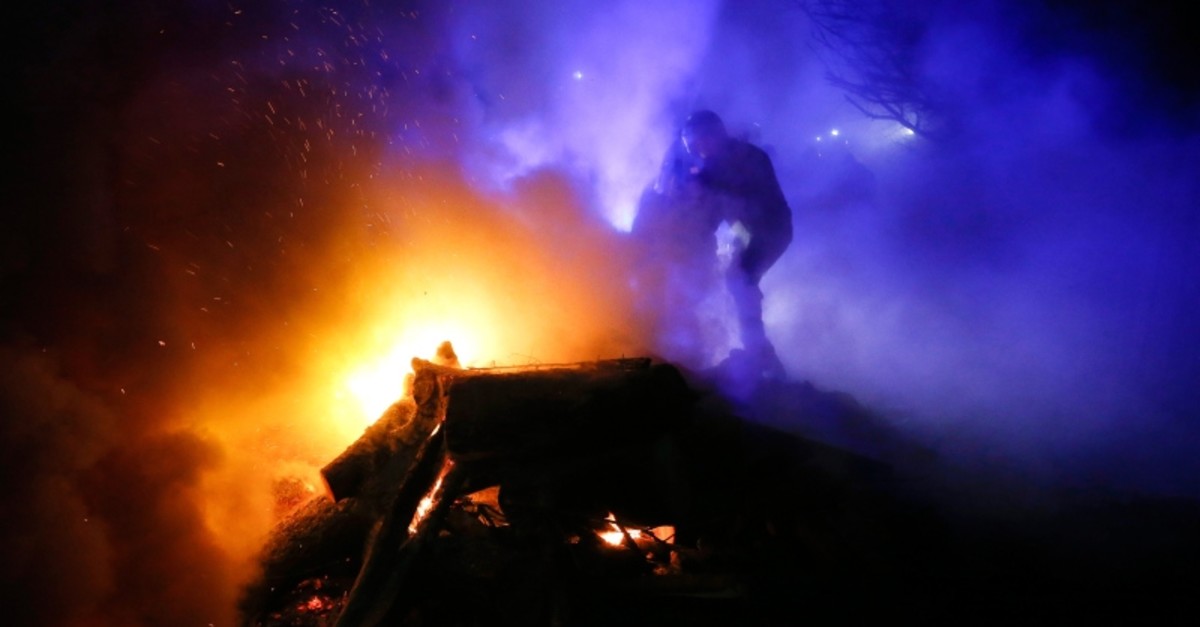 A protester, who planned to stop buses carrying passengers evacuated from the Chinese city of Wuhan, kindles a fire outside Novi Sarzhany, Ukraine, Thursday, Feb. 20, 2020. (AP Photo)
by Associated Press Feb 21, 2020 8:18 am

Ukraine's effort to quarantine more than 70 people evacuated from China over the new virus outbreak plunged into chaos Thursday as local residents opposing the move hurled stones at the evacuees and engaged in violent clashes with police.

Officials deplored the violence and the country's health minister pledged to share evacuees' quarantine for two weeks in a bid to reassure protesters who fear they'll be infected.

Buses carrying evacuees were finally able to reach the designated place of quarantine after hours of clashes. The masked evacuees, exhausted by the long journey, were peeking through bus windows as they drove slowly under a heavy police escort.

Stones shattered a window in one of the buses, but the evacuees appeared unhurt. 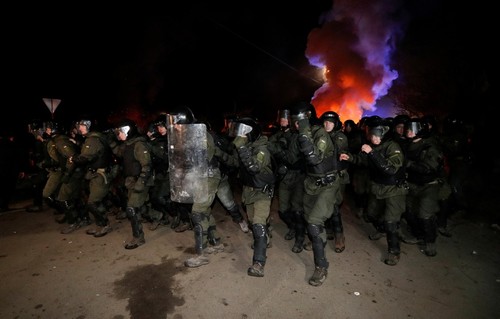 Since the early morning, several hundred residents of the village of Novi Sanzhary in Ukraine's central Poltava region had cut the road to a sanitarium intended to host the evacuees, fearing they could become infected. Demonstrators, some of whom appeared drunk, put up road blocks, burned tires and clashed with riot police who moved to clear access. One protester tried to ram police lines with his car.

Nine police and one civilian were hospitalized, the regional police said in a statement.

More than 10 protesters were detained, and Ukraine's Interior Minister Arsen Avakov personally visited the site of the protests to try to calm the crowd down.

Avakov urged the protesters "not to fall for provocations and be understanding of the necessity for these temporary measures."

Ukrainian President Volodymyr Zelenskiy weighed in, saying the protests showed "not the best side of our character." He tried to reassure people that the quarantined evacuees wouldn't pose any danger to local residents.

In a statement published on his Facebook page, Zelenskiy said the people evacuated from China are healthy and will live in a closed medical center run by the National Guard in the village as a precaution. 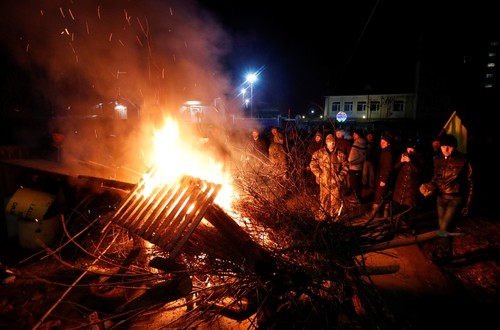 "In the next two weeks it will probably be the most guarded facility in the country," Zelenskiy said.

Ukraine's Health Minister Zoryana Skaletska said she would join the evacuees in quarantine for two weeks to help assuage villagers' concerns. She urged residents to show sympathy and support for the evacuees and emphasized that the quarantine facility is in full conformity with international standards.

"I was shocked by panic, rejection, negative feelings and aggression," she said. "It was even a greater shock for the people who were evacuated from China."

But municipal legislators in the village vowed to continue opposing the evacuation, saying that the sanitarium's sewage system is linked to the one in the village and ends up in a nearby wastewater facility.

"We can't allow putting the health and life of local residents at risk, and demand that top officials take urgent moves to prevent people from China from being put here," they said in a statement.

Amid the clashes between local residents and police, Ukraine's Prime Minister Oleksiy Honcharuk said he will immediately fly to the site to personally oversee things.

In the early hours of Thursday, a plane with 45 Ukrainians and 27 foreign nationals took off from Wuhan, the epicenter of the outbreak that has infected more than 75,000 people worldwid e and killed over 2,100. 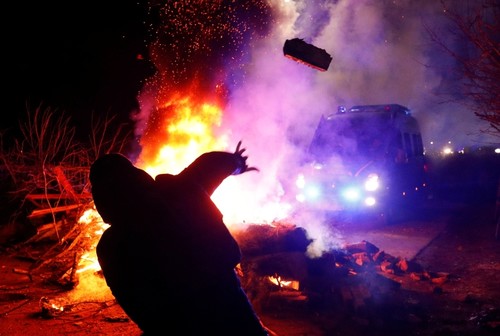 Argentina's Foreign Ministry in a statement thanked Ukraine for its "generosity" and China for its collaboration.

The plane stopped in Kazakhstan to drop off Kazakh passengers. Later, it sought to land in Kharkiv, a city in northeastern Ukraine, but could not due to bad weather conditions.

Instead it flew to Kyiv to refuel, and eventually arrived in Kharkiv.

Also Thursday, the Russian Embassy in Japan said that two more Russians aboard the Diamond Princess cruise ship quarantined in Japan have been diagnosed with the virus. That raises to three the number of Russians on the ship confirmed to have the virus.

The two will be transferred to a hospital in Japan for treatment, according to the embassy.

In Slovenia, authorities said two of six Slovenian citizens who were on the cruise ship have been hospitalized in Japan after testing positive for the virus. The four others have tested negative. Two of them have arrived back in Slovenia and will be quarantined at home for two weeks.

Russia so far has reported only two cases of the disease on its soil. Two Chinese nationals diagnosed with the virus and hospitalized in two different regions of Siberia in late January have recovered and have been released from hospitals.