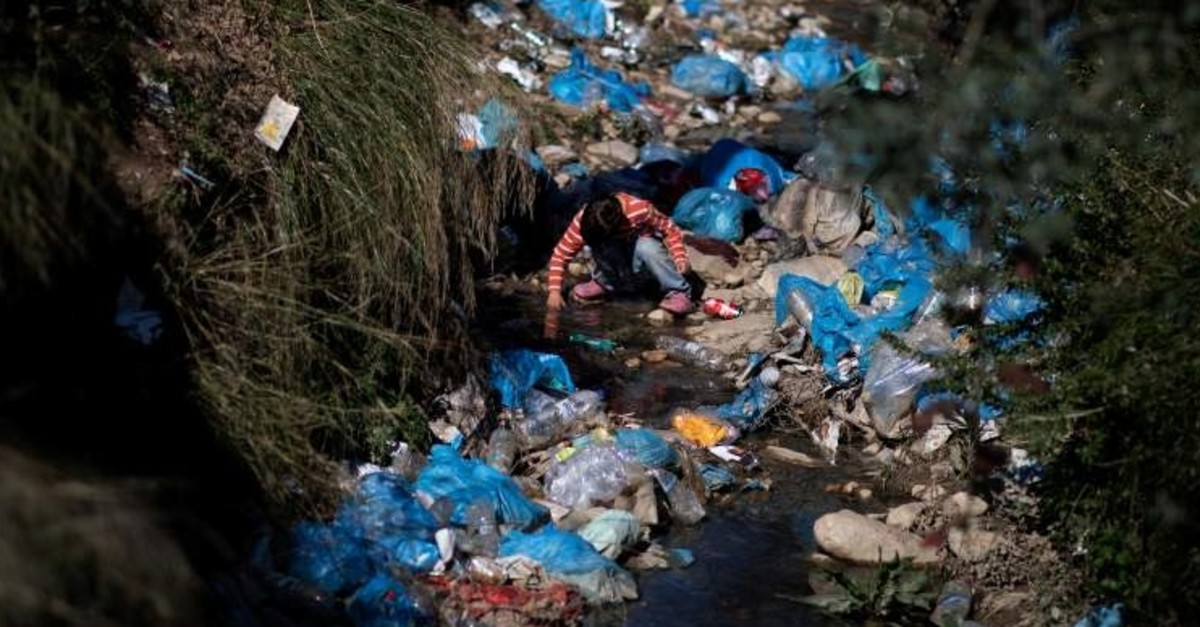 A child searches for his marbles among garbage at a makeshift camp surrounding the Moria migrant camp on the island of Lesbos, Greece, Feb. 18, 2020. (Reuters Photo)
by French Press Agency - AFP Feb 22, 2020 12:36 am

The U.N.'s refugee chief on Friday called for urgent action to address the "shocking and shameful" conditions migrants are forced to live in at reception centers on the Greek islands.

The United Nations High Commissioner for Refugees (UNHCR) Filippo Grandi said swift measures were needed to reduce overcrowding and improve living conditions on the islands prioritizing water, sanitation and healthcare, as the winter weather was exacerbating the situation.

"Conditions on the islands are shocking and shameful," Grandi said in a statement.

"Greece, with European support, has to act now to deal with an untenable situation, while the longer-term measures are put in place."

There are over 38,000 migrants crowded into camps on the Greek islands of Lesbos, Samos, Chios, Leros and Kos despite an official capacity of 6,200.

Island officials and residents have told the Greek government that after five years on the front lines of the European migration crisis, they are no longer prepared to accept thousands of asylum-seekers in their midst.

The conservative government which came to power in July has announced that the island camps on Lesbos, Samos and Chios will be shut down this year, to be replaced with new, smaller facilities that are to be operational by mid-2020.

But while the administration of Prime Minister Kyriakos Mitsotakis tries to alleviate the problem by relocating thousands of migrants to other parts of Greece, many communities on the mainland are attempting to stonewall the move.

The UNHCR on Friday said action is also needed to address the "understandable concerns of the local communities" hosting the refugees and migrants, to avoid social tensions rising still further.

Grandi welcomed the recent efforts by the Greek Government to improve the situation for migrants.

"However, it will inevitably take some time for the planned measures to be fully enacted. Decisive action is urgently needed to alleviate overcrowding through large-scale transfers of asylum-seekers to the mainland, where additional reception capacity must be found quickly," the UNHCR stressed in its statement.

"Many people are without power, and even water, living amid filth and garbage. Health services are negligible," the UNHCR said.

"The risks faced by the most vulnerable individuals, pregnant women, new mothers, the elderly and children are among the worst seen in refugee crises around the world."

Greece could not solve the problem on its own, the U.N. refugee body said, calling on the EU and its member states to take action, highlighting the need to relocate unaccompanied children elsewhere in Europe and by allowing them to reunite with their families where possible.

It was also key, the statement said, to "invest in long-term solutions for those people who are recognized as refugees, by giving them the opportunity to become self-reliant."