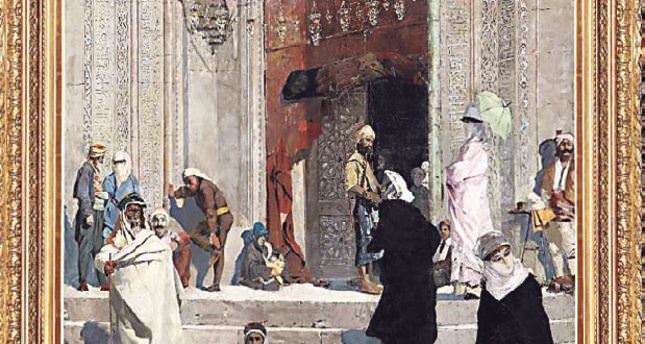 ISTANBUL — One of the most important pieces of art from Osman Hamdi, "Cami Önü" (Mosque Front) will be auctioned by Antik A.S. on May 24 at the Shangri-La Hotel in Istanbul. The piece is an oil painting on canvas completed in 1882, the year Hamdi founded the Mekteb-i Sanayi-i Nefise-i Sahane, currently the Mimar Sinan Fine Arts University. The painting was kept in the collection of former Gebze Mayor Zeki Bey. It will be introduced to art lovers at the Antik A.S. between May 12 and 14.

Regarded as his second biggest piece after "Kaplumbaga Terbiyecisi" (The Tortoise Trainer), the painting will go on auction with an opening price of TL 10 million. "The Tortoise Trainer" became Hamdi's most well-known piece when it sold for $3.9 million (TL 5.5 million) in 2004. His other painting, "Istanbul Hanımefendisi" (The Lady of Constantinople), broke a record when it was sold for $6.5 million in 2008 in London.

In 2012, "Kuran Okuyan Adam" (Man Reading the Quran) was sold for 3 million pounds at Sotheby's auction. Antik A.S. sold his "Vazo Yerlestiren Kız" (A Girl Arranging a Vase of Flowers) for TL 3.2 million in the same year. Kept by William McRae at Pennsylvania University, his "Cami Kapısı" (Mosque Door) was introduced at the Pera Museum in 2010. Professor Edhem Erdem at Bogaziçi University said, "The painting shows the gate of Yesil Mosque in Bursa and its front. As seen in some of his other pieces, Osman Hamdi created a lively scene by placing imaginary steps in the front of the Yesil Mosque."

The piece reflects Hamdi's unique style of using Ottoman characters such as women with veils and umbrellas, sellers and beggars. Founder of the Antik A.S. Turgay Artam said, "We are proud of revealing prominent Turkish painter Osman Hamdi's masterpiece for the first time. Our primary aim is to discover the hidden pieces and share them with the public. Turkish artists should be given their deserved respect."

Artam extended his thanks to the collector who preserved the piece until now.