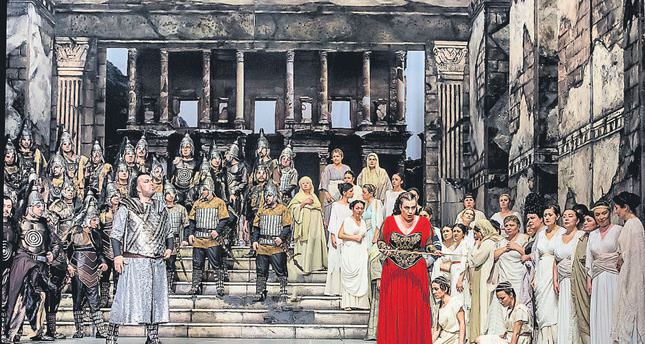 by Özkan Binol Jun 04, 2014 12:00 am
The General Directorate of State Opera and Ballet opened its doors for the fifth International Istanbul Opera Festival sponsored by DenizBank. The highly-respected event will offer the finest in music, dance and opera between June 3 and 17. Yekta Kara, director of the State Opera and Ballet, emphasized that opera is not merely for elitists, but for all social classes. "Opera is for everyone, anytime and anywhere," she said.

When was the International Istanbul Opera Festival born?

Kara: As you may remember, Istanbul was selected the European Capital of Culture in 2010. A series of events were organized to duly promote Turkey across the globe. One day, our General Director Rengim Gökmen suggested to kick off an opera festival in Istanbul. This was my longtime dream and I could not believe my ears.

Since the early editions of the festival, our institution adopted certain missions. First, opera is an important cultural heritage in the history of mankind. Everyone deserves to get his own share. Secondly, opera events should become more popular among society. The Istanbul State Opera and Ballet (İDOB) stages regular cultural events. The fact that Istanbul has become an urban mass, opera should reach the whole city. I mean, we had to go out of our traditional stages and gather the audience at historic places. Our aim was to create a triplet between opera, audience and historical sites by making such places more functional. In the previous years, Topkapı Palace, Yıldız Palace and Rumeli Fortress hosted opera events. DenizBank has offered significant support since the beginning. I would like to express my sincere thanks to them.

The slogan of the first festival was "Opera Reaches the Masses." Did you mean opera is not in touch with society?

Kara: I assume we did not express ourselves properly in the glow of initial enthusiasm. Certain people criticized that operatic artists perform on their own as if they were living in ivory towers, detaching themselves from society.

Our slogan was a response to such comments. We moved out the so-called ivory towers and changed our slogan to "Opera for All" in the third festival we organized. In other words, even a man selling Turkish bagels on the corner has the right to watch opera anywhere and anytime.

In a manner of speaking, you broke with tradition. Kara: We have to break our routines because Turkey has changed and all of us have changed as well. I do not only mean the youth. Middle-aged people have also changed and need to be comfortable with this century's requisites.

What do you look out for when you create the festival's repertoire?

Kara: First of all, classical pieces are indispensable in our festival program. Do not underestimate classical opera works. Our performers present the modern interpretations of classical pieces. More explicitly, it is not rational to stage a piece dating back to the 17th or 19th century without any adaptations. This is one of the underlying reasons for the longtime prejudice against opera in Turkey.

Bear in mind, masterpiece works do not become obsolete. Such major opera composers successfully reflected mankind and life. These excellent works will be alive as long as humankind exists. The more important thing is, however, the masterpieces should be interpreted in line with today's perspectives. Another criterion is the Western audience's point of view. We pay particular attention to what they think and feel about Turkish opera. This is because the pieces dealing with the Turks are our top priority. The Turkish opera composers also have a special place in the repertoire.

Are any there any "must see" opera pieces in the festival's repertoire?

Kara: Sure. Mozart's charming "Die Entführung aus dem Serail" (The Abduction from the Seraglio) is one of them. The farcical romance is set in Istanbul, describing the Turkish people's tolerance and virtues. Anything Turkish was in style even before the French Revolution.

Mozart underlines the significance of tolerance through Selim Pasha who is the most merciful character of the play. Mozart's piece is not merely performed due to its location, but his messages toward Turkey are still valid.

Can we say the festival brought a new international perspective to Turkey?

Kara: Absolutely yes. I always say Turkey has an accomplished opera institution staging high-quality performances which are able to compete with the Western contemporaries.

Besides, I am making my best effort to share my thoughts among people, thinking there is desperate need to introduce ourselves better. The opera festival gave this chance to us. The western world is now well aware of Turkish opera more so than ever. They are becoming more familiar with Turkish composers and artists. The young Turkish performers can also display their skills via the event.

Why are there no opera performances at historic places?

Kara: There are some reasons for our decision. First of all, there will be a world championship in July. We therefore avoided an overlap by arranging the festival one month earlier. The second reason is the summer holiday. When schools are closed, Istanbul residents flee from the city. We wish to see as big an audience as possible throughout the festival. The most important reason is the weather. Only Mozart's piece will be presented at the Archeology Museum's garden this year.

Ferzan Özpetek staged an opera in Napoli last year. Did you consider adding his piece to the festival program?

Kara: Of course I did. We were really willing to add his piece in last year's schedule, however the production company asked for an astronomical price. It was not possible for us to afford it. We might come up with different solutions for following festivals. The performers, stage decoration and costumes may be requested from the company, but our orchestra can accompany them. I want to stage Özpetek's work in Turkey especially because the opera building in Napoli was where world-renowned operatic soprano Leyla Gencer made her debut.
Last Update: Jun 04, 2014 11:16 am
RELATED TOPICS