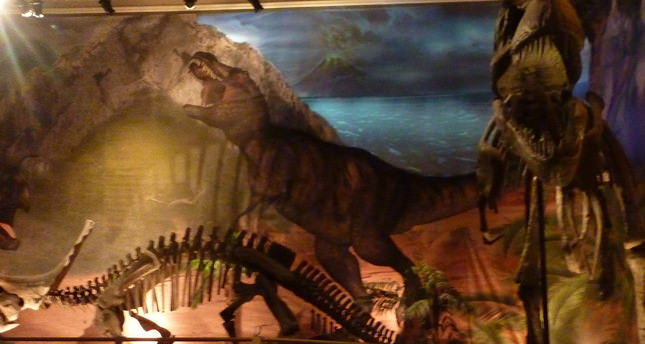 by Daily Sabah Aug 09, 2014 12:00 am
Jurassic Land is the first themed park in Turkey that focuses on the concept of "edutainment" that is based on teaching while entertaining. The biggest dinosaur themed park in Europe, built on an 8,000-square-meter area, Jurassic Land offers studies, research and discovery of the dinosaur world for children between the ages of four to fifteen and their parents. The park has hosted many school groups since its establishment and holds a museum status approved by the Ministry of Culture and Tourism, which can be used for historical research. Featuring the 4-D moving Juracopter cinema, the dinosaur science center consist of five units, dinosaur skeletons, eggs, dinosaur themed events and activities, the park/museum attracts children and their parents with an adventurous journey through the adventurous land of the dinosaurs. Jurassic Land provides children with interesting activities such as excavations, t-shirt and dinosaur egg paintings. Moreover, Jura Party House, with its exclusive decoration and tree house, offer opportunities to children to celebrate their birthdays and other special occasions. The park/museum also has a laser tag area. Laser tag is a team game in a 650-square-meter area with fantastic décor of model dinosaurs. The game is played with realistic but totally safe laser guns. Thanks to the vibration in the guns, visitors can feel as if they are in a real laser war. The game, which has different gun sizes for visitors between the ages of 7 to 14 and 14 to 20, lasts for approximately 15 minutes. In the Dino Laser Tag game where physical contact and leaving the arena is forbidden, the goal is to survive the game without getting shot.