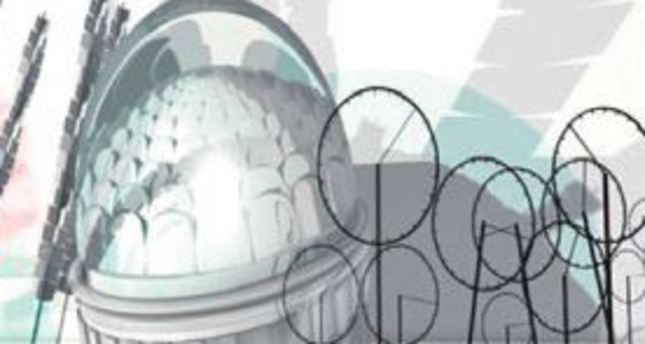 by Daily Sabah Aug 15, 2014 12:00 am
Şekerbank Açıkekran (Open Screen) New Media Arts Gallery is hosting a mixed exhibition under the curatorship of Ali Akay. "Lines and Getaways" features works by Haluk Akakçe, Christelle Familiari, Ali Emir Tapan and Seza Paker. The artists' works study time perception together with the concept of mirroring the fine lines between noise, music and image.

Focusing on the interaction between visual arts, music, noise and noiselessness, the exhibition offers a space where visitors can experience interdisciplinary interactions through a waltz accompanying Akakçe's animations and Paker's visual world accompanied by Elle Fitzgerald's vocals. Familiari's video over noiselessness and transitivity and the metaphors used in Tapan's "Prova" (Rehearsal), which refers to an orchestra rehearsal, complete the exhibition.

Set to run until Sept. 12, the exhibition is open every day except Sundays and Mondays at Şekerbank Açıkekran New Media Arts Gallery. Akakçe's work titled "Shadow Machine," which presents heterogeneous compositions formed by the togetherness of contradictory images referring to the modern world, will be screened at the gallery in Teşvikiye simultaneously with Şekerbank's branches in Istanbul Feneryolu, Ankara Küçükesat and Çankaya, Tekirdağ Alpullu, Ordu, İzmir, Bodrum, Mardin and Edirne via custom monitors for 24 hours.