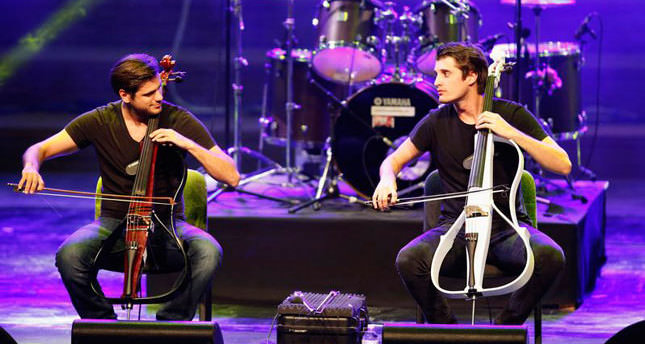 by Daily Sabah Aug 26, 2014 12:00 am
2CELLOS will take the stage on Aug. 31 at the Harbiye Cemil Topuzlu Open-Air Theatre, as a part of Turkcell Starry Nights concerts. Young Croatian musicians Luka Sulic and Stjepan Hauser, also known as 2CELLOS, have accomplished sensational success by taking the cello to a whole new level as their musical style breaks down walls between pop, rock and classical.

The band became famous after their 2011 Michael Jackson cover of "Smooth Criminal" helped them storm through the world music industry.
The duo also caused a viral sensation after receiving an invitation from Elton John to join him on his world tour. 2CELLOS continue to surprise with their views on YouTube. Their tours in the U.S, Japan and Europe sold out, and the duo appeared as guests on popular T.V shows such as The Tonight Show Jay Leno, The Ellen DeGeneres Show, Lopez Tonight, and TV Total.

Furthermore, the band was included as guest artists on the popular TV show "Glee" with their "Smooth Criminal" cover. 2CELLOS also entered the Billboard Hot 100 Digital Song Chart at number 10. Their performance with China's "Superstar" pianist Lang Lang on the CCTV New Year's Gala Program drew over one million viewers. They have performed at prestigious venues such as Madison Square Garden, Paris Olympia, Queen Diamond Jubilee and the Emmy's. Apart from their world tour with Elton John, the duo has also worked with the Red Hot Chili Peppers, Steve Vai, and George Michael Queens. Sulic and Hauser's fan base keeps growing as 2CELLOS climbs higher in their musical career.