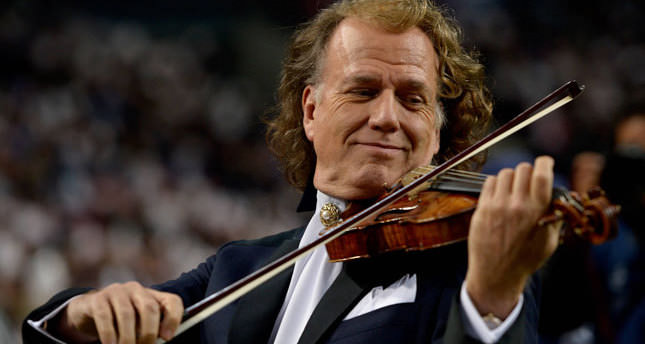 by Daily Sabah Aug 30, 2014 12:00 am
From October to November, Istanbul will host world stars at the "Good Music in Town" concerts sponsored by Yapı Kredi Bank marking its 70th anniversary. The Israelbased a cappella group "The Voca People," which often performs to a full house, will take the stage at Black Box Istanbul on Oct. 15. The dynamic group harmonizes a cappella and vocal sounds with modern beatboxing, and bridges between languages, cultures and even planets. With the motto of "Life is music and music is life," the musical group dazzled the audience in South America, the U.S., Canada, Europe and the Middle East for the past five years. Voca People performs top-hit songs through only human voice and presents a stunning family entertainment with their interactive show. Besides the popular songs of famous stars such as Lady Gaga, The Beatles, Adele, Queen, Maroon 5 and Michael Jackson, the group also performs well-known soundtracks like the theme songs from "The Godfather," "The Pink Panther" and "Mission Impossible." The ingenious musicians go even further, performing classical masterpieces from Beethoven to Tchaikovsky.

English operatic soprano, actress, song writer and dancer Sarah Brightman will delight music lovers at Ülker Sports Arena on Nov. 9 in Istanbul. As the world's biggest selling soprano, Brightman interprets and performs classical music pieces and famous ballad operas in a unique way. She previously took leading roles in numerous musicals such as "Phantom of the Opera," "Cats," "Requiem" and "Aspects of Life." Brightman achieved great momentum with her duet "Amigos Para Siempre" with Jose Carreas at the Olympics and "Time to Say Goodbye" with Andrea Bocelli. Described as one of the world's most important female vocalist, Brightman will be ready to give an unforgettable performance. Award-winner American jazz singer Dee Dee Bridgewater is regarded among today's master jazz vocalists. Istanbulites will see how she performs classical pieces different from the familiar versions. Jazz devotees will flock to Uniq Hall on Nov. 21. She had chance to work with Dizzy Gillespie, Sonny Rollins, Dexter Gordon and Max Roach, and was presented a Tony Award for her role at The Wiz Musical. Additionally, her 1997 album "Dear Ella" won the Grammy Award for Best Jazz Vocal Album.

Considered as one of the century's most influential musicians, Dutch violinist and conductor Andre Rieu will give his second concert in Istanbul with a new show as a part of his 2014 world tour. Last year, he took stage in November and the tickets were sold out months before. "The King of Waltz" will perform at Sinan Erdem Sport Hall on Nov. 27 and Ülker Sports Arena on Nov. 29. In 2012, Rieu was the world's best-selling male musician who came first on album lists 30 times, and has won 355 Platinum Album awards with more than 350 million DVD sales. He ranked 12th among the bestselling musicians in the 2012 list of the POLLSTAR rankings of the concert industry's top performing artists. According to Billboard magazine, André Rieu was the world's most successful male touring artist in 2009. In a review by The New York Times, Rieu was described as "the Madonna of classical music." The article says his musical performance has the power to embrace the whole world.