BLACK AND WHITE PHOTOS exhibited where beauty and magic meet 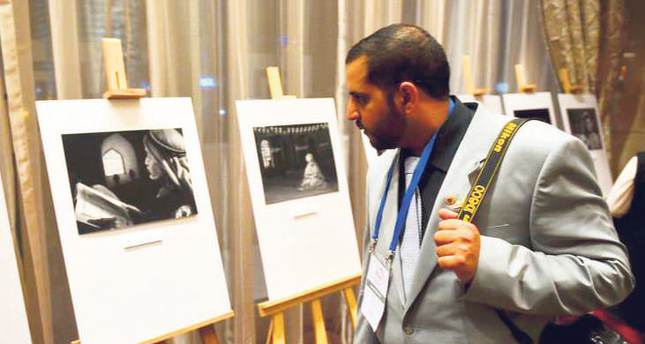 by AA Sep 04, 2014 12:00 am
Organized by the International Federation of Photographic Art (FIAP), the 32nd Black and White Biennale Exhibition is being held in Ankara and Cappadocia until Sept. 7. Minister of Culture and Tourism Ömer Çelik attended the opening ceremony of the exhibition, which took place at the Marriot Hotel in Ankara. In his speech at the opening ceremony, Çelik quoted Rumi, saying, "People who share the same emotions can get along with each other, not the people who speak the same language." While he noted that photography creates a universal language that is original and constantly developing, he emphasized the importance of the photographers taking part, noting that a single shot can tell the whole story of the drama in Gaza, Aleppo or Burma. "Photographers mirror the reality of peace, war, motherland, longing and a farmer or the heartbeat of an animal chasing its prey, color, light, water, drought and fertility," said Çelik. "Anybody can take a photo but only people with aesthetic perspective can be photographers, adding that black and white photos have a special place in the art form. When you photograph somebody in black and white, you also photograph his soul," the minister said.

He also provided information about the ministry's projects on photography like the "State Photography Competition," an initiative designed to develop and spread Turkish photography, support artists and open international exhibitions representing Turkey. He said that communication around the world is now carried out through visuals and that the ministry allocates funds to digital and social channels to help promote Turkey in our age of mass communication. Çelik said they have kicked off a new public image project including all digital and social media platforms. "Our goal is to be recognized as the country that uses digital and social media in the most successful way and keeps up with new trends in the long run to provide a basis for our future promotional strategy." Responding to a question about when was the last time he took a photo, Çelik said: "I will tell you a secret. When I was a child, I worked with a photographer during summer holidays to earn my pocket money. Back then, there was a camera named the Jupiter-2. I worked in the darkroom and washed the photos in the fountain. I hung the photos on a string to dry, as we did not have today's technology. We even hung photos in front of a fan to dry them faster.

Hence, I answered your question as a person who took photos when he was a child." FIAP President M. Riccardo Busi said more than 250 contestants from 41 countries came to Turkey just to see the magical country "where beauty and magic meet." He noted that the artists would photograph historic, touristic, cultural and social places within the scope of the congress that will continue until Sept. 7. Claiming photography has no language barrier, Busi said that the artists would take back memories from their time in Turkey, as well as photos. In addition, an Austrian artist won the golden medal, while a Vietnamese artist was granted the silver and an English photographer won the bronze medal. The Black and White Biennale World Cup award was given to Bahraini artists by Minister Çelik.