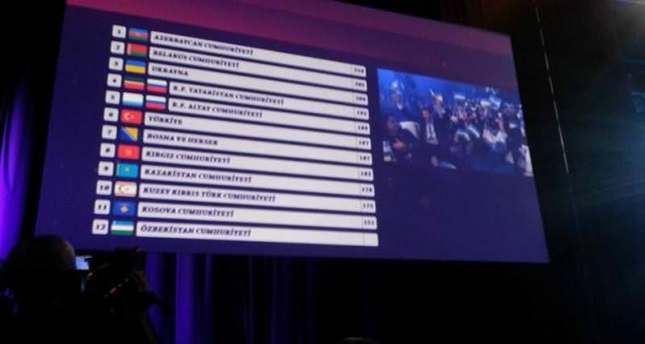 by Daily Sabah Oct 02, 2014 12:00 am
The Türkvİzyon Song Contest will take place in Tatarstan's capital of Kazan from Nov. 10-21. Organized by the Türk Müzik Birliği (TMB-Turkic Music Association), TAT Media and the International Organization of Turkic Culture (TÜRKSOY), the first rendition of the song contest was held last year in Eskişehir. The contest's launch event recently took place at the Çırağan Palace. Alongside renowned musicians from Turkey and other Turkic countries, Tatarstan's Deputy Culture Minister İrade Eyyupova, TÜRKSOY General Secretary Duisen Kasseinov and TMB TV CEO Samir Gurbanov participated in a press conference. The song contest intends to gather singers from the Turkic world, improve cultural ties between these countries and promote and share the Turkic world's music, language, traditions and art across the world. This year, Kazan was announced as the Turkic World Culture Capital. The contest will present singers from 24 different countries. Turkish composer and singer Sinan Akçıl will represent Turkey on the jury committee. The semi-finals will be held on Nov. 19 followed by the final stage on Nov. 21. Interested viewers can watch the contest live on TRT AVAZ.