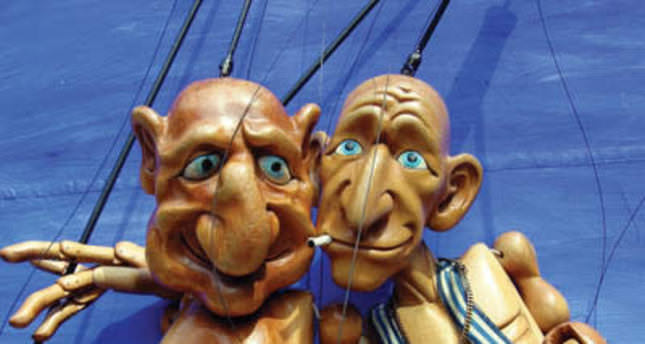 by AA Oct 17, 2014 12:00 am
The 17th International Istanbul Puppet Festival is welcoming many puppets and puppet theater companies from around the world until Oct. 26. Speaking to Anadolu Agency (AA) during the opening party at the Consulate of the Netherlands in Istanbul, the festival's art director, Cengiz Özek, said they had never thought the festival would grow this big and attract this much interest. Puppeteering dates back hundreds of years in Turkey.

"We were not aware of that," Özek said, adding that Karagöz [a character in a traditional Ottoman and Turkish shadow play] has been around for 500 years. "We dedicated this festival to our shadow plays and we launched this festival with that enthusiasm," he said. Officially launched yesterday, the event will host 70 shows of 30 puppet theater companies from 15 different countries around the world.

The festival, which is dedicated to shadow play master and puppeteer Tacettin Diker will welcome puppeteers from Kazakhstan, Belarus, the U.S., Spain, Italy, France, the Netherlands, Romania, Colombia, Indonesia, Sweden, Russia, Poland and Turkey. Throughout the festival, puppets and puppetry will be thoroughly analyzed and feature a wide-range of puppets from Marionettes to rod puppets. "We will present both modern and traditional plays from every perspective," Özek said, and the festival will have plays for every age group as well. Apart from the plays that will feature hundreds of puppets along with their costumes and details, the organization will feature exhibitions, workshops and film screenings.

The film screenings will take place at the French Culture Center, AkSanat, Consulate of the Netherlands in Istanbul, Maya Cüneyt Türel Stage, Caddebostan Culture Center, Saint Pulcherie High School and Toy Museum in Taksim. As part of the festival, the play "Robin Frohardt," which recounts the story of cleaning addict, Frank, and his exasperating pigeons will make its premier. Three Turkish plays, which will be staged at the Kilkis International Puppet and Mime Festival in Greece, will also be introduced to Turkish audiences.

Jointly undertaken by the Istanbul Karagöz Puppet Association and the Puppet and Actor Theatre, Kubuś, in Poland, the play "Cinnamon Shops" will make its world premiere at the festival. The six performances of the play, based on the stories of Bruno Schulz, will be staged for free of charge in honor of the 600th anniversary of diplomatic relations between the Ottoman Empire/Turkey and Poland. The festival will take place in culture centers and shopping malls on the both sides of Istanbul.