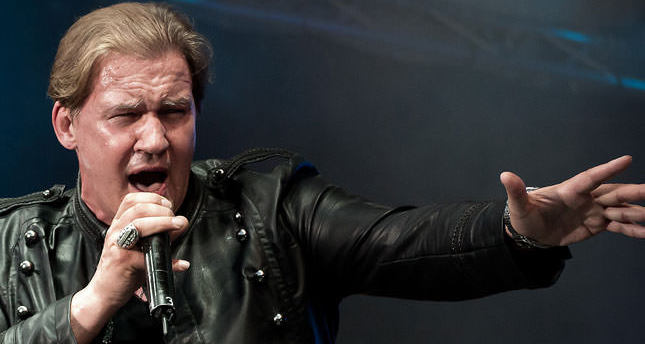 by Daily Sabah Oct 20, 2014 12:00 am
Two-time Eurovision winner Irish Johnny Logan will take the stage with Istanbul Metropolitan Municipality (İBB) City Orchestra within the scope of a series of concerts titled "Eurovision Concerts from Past to Present." Bülent Özveren will host and consult the concert which is scheduled to take place on Oct. 20 at the Cemal Reşit Rey (CRR) Concert Hall. Known for his success in the Eurovision Song Contest, song writer and composer Logan will perform Eurovision songs including "Seninle Bir Dakika" (One Minute with You) by Semiha Yankı, "Everway That I Can" by Sertab Erener and his own songs "What's Another Year" and "Hold Me Now."

The Eurovision Song Contest was introduced to Turkish people in 1973 when the TRT (Turkish Radio and Television Corporation) began to broadcast it live in Turkey. "Seninle Bir Dakika" by Semiha Yankı was Turkey's first song to compete in the contest and Sertab Erener's "Everway That I Can" won the contest in the 48th edition of the organization which was held in Latvia in 2003. After this achievement, the 49th Eurovision Song Contest was held at the Abdi İpekçi Arena in Istanbul.

The İBB City Orchestra was founded by maestro Ekrem Tekes in 1989 and achieved to fill the musical void in the art circles of Istanbul with its repertoire composed of classical and pop music, Turkish pop, and rhythms from Turkish folk music, musicals, soundtracks along with foreign pop music. The İBB City Orchestra performed at many public venues and music halls including the Cemal Reşit Rey Concert Hall. The orchestra also made Turkish people proud with the awards which they won both nationally and internationally. They took the stage at various public concerts which were free of charge and accompanied several important local and foreign soloists and musicians. The orchestra transformed into "Symphonic Pop Orchestra" with the additional stringed instruments in 2008. Under the leadership of Maestro Kamil Coşkun who also made arrangements of the songs, the İBB City Orchestra reaches out to music lovers with at least 50 concerts in a year.

Known as "Mr. Eurovision," Irish song writer and composer Johnny Logan won the Eurovision Song Contest twice with his songs "What's Another Year" and "Hold Me Now" in 1980 and 1987 respectively. He is also the composer of the 1992 the Eurovision Song Contest winner "Why Me," which was performed by Linda Martin in Sweden and "Terminal 3," which was also performed by Martin in 1987 and helped her claim second place in the contest.