Seb-i Arus a night of uniting with the beloved 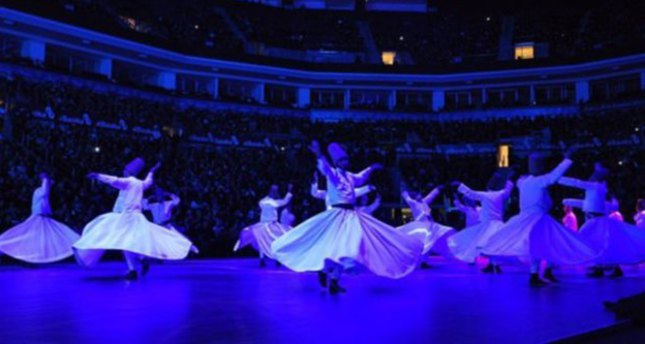 Death, for some, is the end, while for Rumi, it is an occasion to celebrate, a wedding night that will unite him with his beloved

Each year in December, Konya, a clean and put-together central Anatolian city, where Rumi spent most of his life, draws in pilgrims for the "Şeb-i Arus" (Reunion with the Beloved) event to celebrate the anniversary of the great poet's union with his Beloved, God.

Commemorations of the 741st anniversary of the death of Mevlana Celaleddin-i Rumi commenced on Sunday in Konya with a candle-lighting ceremony, the traditional Gülbang prayer reading, a walk of "love and tolerance" and a "sema" ceremony - the performance of whirling dervishes. Running until Dec. 17, the commemorations are taking place at the Mevlana Culture Center and the newly constructed Konya Municipality Sports and Congress Center. More than 60,000 visitors are expected to attend the ceremonies. The congress center, which has a capacity of more than 10,000 people, will host the events on Dec. 13 and on the night of Dec. 17, which is celebrated as "Şeb-i Arus" (Reunion with the Beloved). During the two-week-long celebration, 21 sema ceremonies are scheduled to take place. The Metropolitan Municipality Theater Group will stage the play "Mevlana ve Hoşgörü" (Mevlana and Tolerance), while poetry readings and concerts by choirs from Istanbul, Ankara and Bursa will also take place. The tomb of Mevlana, Shams Tabrizi, Ateşbaz-ı Veli and Sadrettin Konevi, all of whom are recognized as spiritual leaders of the Islamic World and Sufism, are located in Konya, which adds to the city's importance, especially during December. However, whirling dervish ceremonies can be organized at the Mawlavi Houses in different Turkish cities and even in Cairo, Sarajevo, Damascus, Aleppo and Crimea on Dec. 17.

Due to the high demand with tickets being sold out long before the event, AdStation, an Istanbul-based events organization company is in the process of setting up Sinan Erdem Sports Hall - Turkey's largest - for the third large-scale Şeb-i Arus event in Istanbul to take place this Saturday, Dec. 13.

Daily Sabah: You organized the first large-scale Şeb-i Arus event in Istanbul in 2012. Whose idea was it to bring the event to Istanbul?

Muhittin Palazoğlu: Şeb-i Arus was a spiritual world that had captivated me since I was a young boy. Surely my family's tasawwuf background too has a share in this influence. With time and as I became involved in the business world, I realized some void in the area. These events that had influenced me so deeply were not available to all. Most people could not participate in the events even though they wanted to and were left outside the unifying teachings of Mevlana. We saw that it was necessary to organize such an event in a city like Istanbul, which has such intense spirituality since the past to present. We have no intention to compete with Konya. We simply wanted to offer an alternative for those who were unable to go there. The feedback we have been receiving for the last two years is an indication that we have done our share even if little.

DS: The scale of the event is growing each year. For the third year of the Istanbul organization you even changed venues. You are expecting 15,000 people this year. Are you anticipating further increase in participation in the upcoming years?

MP: For the last two years, the event was held at the largest indoor sports hall on the Asian side of Istanbul, the Ülker Sports Arena. This year, the event is going to take place at Turkey's largest indoor hall, the Sinan Erdem Sports Hall. Our objective, as I mentioned earlier, is to enable more people to experience this spirituality, to touch more hearts and to do what we can for more people to understand Rumi. In this context, in the following years, we plan to reach a wider geography outside the borders of Turkey.

DS: The 2014 event organized in collaboration with the Ministry of Culture and Tourism and Istanbul Metropolitan Municipality will be featuring reputable Turkish singers such as Mustafa Ceceli, Yavuz Bingöl, Alişan, Yusuf Güney and Sami Özer in addition to the whirling dervish performances. Do you have certain criteria when selecting the performers?

MP: Of course we have certain priorities. We are commemorating a very valuable identity in a spiritual atmosphere. Hence, we need people who share our feelings. So, our friends who will be performing on the night will be taking stage not simply to take stage but to be a part of the atmosphere. Hymns are not melodies that can be sung by just any singer; this detail is also taken into consideration [when making the selection]. Also, our singers will not be receiving any compensation for their performances on the night, showing that their participation is for spiritual purposes alone rather than material.

DS: President Recep Tayyip Erdoğan is also expected to attend the night. Will there be any unmentioned surprises for the audience?

MP: Mr. Recep Tayyip Erdoğan and his wife Emine Erdoğan had attended the previous [Şeb-i Arus] events [in Istanbul]. At those events our singers and Mr. President who was then prime minister had various surprises for the guests. Let us note that this year too there will be surprises, but our guests will see more on the night.

DS: What will be different in this year's program?

MP:We aim to continuously develop and always improve what we do. This year our event will be featuring more stars in a much bigger hall. We will have earphone services for the blind and a sign-language interpreter for the deaf. Some 200 disabled guests will also be accompanying us on the night.

DS: How is demand from abroad?

MP: We have large high-level participation from abroad. Rafet Hüsoviç, the deputy prime minister along with the parliament speaker of the Republic of Montenegro, deputies, mayors and religious leaders from Macedonia, Kosovo, Bulgaria and Greece among many others are expected attend on the night.

Mr. Palazoğlu has noted that the proceeds of the night will be used for charity work in cooperation with a foundation active in sponsoring students and restoring mosques.