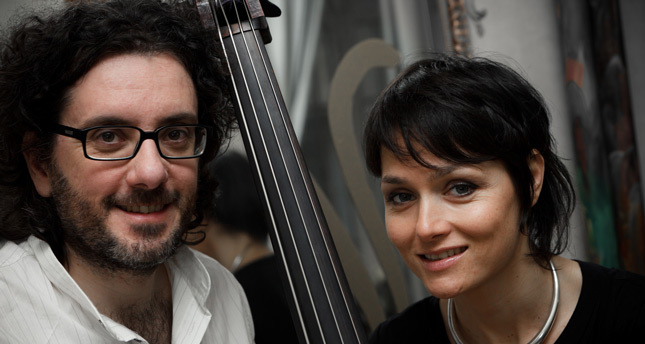 by Daily Sabah Dec 26, 2014 12:00 am
Conducted by Daniele Di Gregorio, Italian music group Musica Nuda will give a must-see New Year concert with the Cemal Reşit Rey Orchestra this week. The simplicity in Musica Nuda's performance is sometimes reminiscent of a deep love or of both the past and the future.

The group takes you on a journey to former music traditions that shed light on today's music world. Di Gregorio arranged the orchestral music for the upcoming concert, and Musica Nuda will perform in Istanbul for the first time with a repertoire from their recent album "Banda Larga," which debuted in Italy.

"Banda Larga" contains Musica Nuda's best songs along with unique interpretations of classical Italian musical numbers. In 2013, the group performed with maestro Di Gregorio, who can play many musical instruments.The duo attracted great interest in Italy as well as around the world with their unusual repertoire and the unique harmonization of contrabass and vocal music. The group's creativity is inspired from jazz, rock, punk and traditional Italian music. Indeed, they feature a music style similar to the meaning of their name, which means naked or undressed music in Italian.

The duo has released five albums and each of them broke sale records. Musica Nuda's fans extends beyond Italy, as they have also given concerts in prominent art and culture centers such as Paris, Tunis, New York, Toronto, Salzburg, the Netherlands, and St. Petersburg.