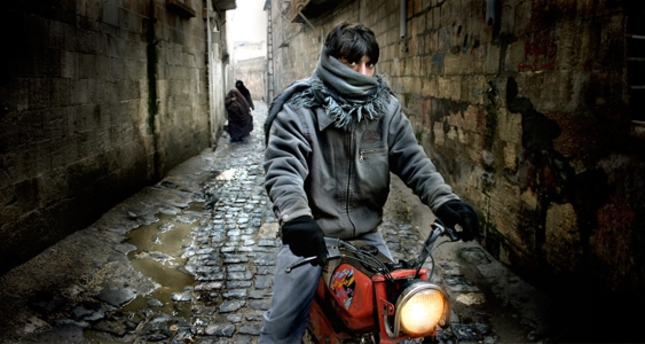 by Daily Sabah Dec 29, 2014 12:00 am
"The Panoramic Eye" photo exhibition featuring 49 photographs taken by Nuri Bilge Ceylan since 2003 has opened at Cernmodern in Ankara. Ceylan who won the Palme d'Or at the 64th Cannes Film Festival for his film "Winter Sleep," his wife Ebru Ceylan, Ministry of Culture and Tourism Cinema Director Cem Erkul and many guests attended the opening ceremony of the exhibition. Ceylan began taking photographs 35 years ago but paused due to his films. The photographs he took in Cappadocia after filming "Uzak" (Distant) marked his comeback in 2003, and his photography adventure continues with exhibitions that he has held in Turkey as well as abroad. Ceylan, who mirrors humans and history with different compositions in his photographs, presents works that were taken "around Turkey while he was searching for new sets for his films." The exhibition includes photographs titled "Anne ve Kızları" (Mother and her daughters)/Bitlis," "Karlı Bozkırdaki Süvari" (the Cavalry in the Snowy Moorland), "Balıkçının Oğlu (Son of the Fisherman)/Kahta," "Kız Kulesi (Maiden's Tower)" and "İki Kız Kardeş" (Two Sisters)/"Doğubeyazıt." The exhibition at Cernmodern's main gallery will be open until March 26, 2015.