Georgian pianist to perform with the Basel Chamber Orchestra 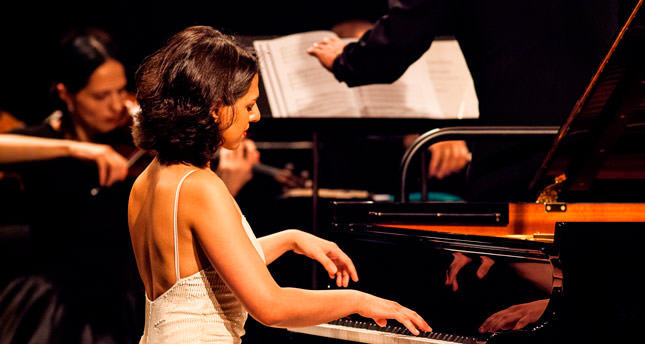 by Daily Sabah Jan 07, 2015 12:00 am
The Basel Chamber Orchestra, one of the most prominent ensembles of Switzerland, will perform the works of Rossini, Beethoven and Haydn with Georgian pianist Khatia Buniatishvili, in a concert conducted by Italian maestro Giovanni Antonini, one of the leaders of the Italian-period instrument movement. The orchestra ranks among Europe's most distinctive and successful orchestras, as the 90 concerts the groups performs each year demonstrates. The ensemble won an award from ECHO Klassik in 2008 with their recording of Beethoven's Third and Fourth Symphonies, which were also conducted by Antonini. Music critics characterize Buniatishvili's performance as an aura of elegant solitude and even melancholy, and she gained recognition when she won the special prize at the Horowitz International Competition for Young Pianists in Kiev, Ukraine in 2003. She launched her latest album "Motherland" in May, which she dedicated to her mother for being supportive of her career. The winner of the Bronze Medal at the 12th Arthur Rubinstein Piano Master Competition in 2008, the artist performed regular concerts with BBC orchestras between 2009 and 2011 as the "Artist of the New Generation." Those who do not want to miss Buniatishvili's warm and sometimes sorrowful performance, which reflects her tendency to incorporate Georgian folk music, should definitely mark the date in their diaries.