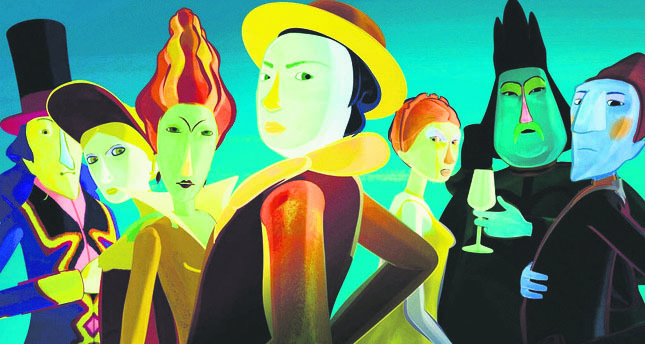 by Daily Sabah May 17, 2015 12:00 am
Held at Istanbul Modern, Mehmet Güleryüz's "Retrospective" presents an inventory of the artist's career from the 1960s up to the 2010s. The exhibition sheds light on his deep quest for expression in various fields from sculpture, engraving, drawing and theater to performance. The veteran painter studied at the State Fine Arts Academy in the 1960s and became popular in the Paris art environment with his "happenings" in the 1970s. He took an active role in the transformation of Turkish art in the 1980s. Güleryüz's art shows an unusual development that describes how he is able to generate an individual discourse. He is also an actor, allowing him to create a close link between the theater and visual arts, and produce the most interesting examples of an interdisciplinary approach. The exhibition brings together all the productions of artists that he has nurtured in different fields, such as painting, sculpture, gravure, ceramics and performance, since the 1960s. Presented in chronological order, the exhibition is enriched with texts written by Güleryüz, who explores his inner world. The display features nearly 150 works and 300 pattern works that will be animated by multimedia presentations revealing the bond between the painter and the painting. Apart from these, the exhibition held at Istanbul Modern offers a rich bibliographical wall introducing a personal story from the art scene in Turkey with Güleryüz's own life story, texts written for him, different experiences, and all periods in his artistic career from the 1960s to the present day.