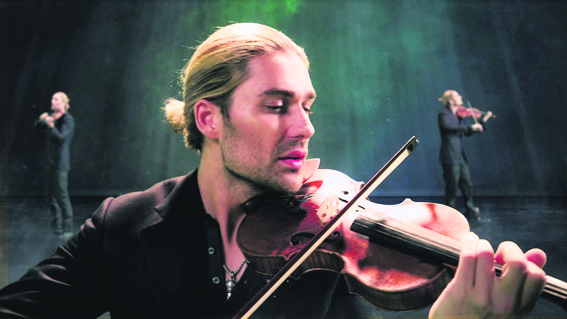 by Daily Sabah May 18, 2015 12:00 am
David Garrett, one of today's most important violin virtuosos, will perform in Turkey for the first time on Wednesday. The German musician will meet his Istanbul audience at the Haliç Congress Center. Taking the audience on a mesmerizing musical journey with his violin, Garrett will perform a violin recital featuring the classical pieces of Johannes Brahms.

He learned to play the violin by himself when he was four years old, and began giving recitals when he was seven. He recorded his second album when he was only 13 years old. Commonly referred to as the genius child of violin, Garrett also broke a Guinness record as the world's fastest violinist. He performed "Flight of the Bumblebee" in 66 seconds, averaging 13 notes per second. Harmonizing rock and pop with classical music, Garret has a huge fan base from around the world. His concert tickets are sold-out months before, and Garrett draws the attention of the media and the public in every country in which he performs.