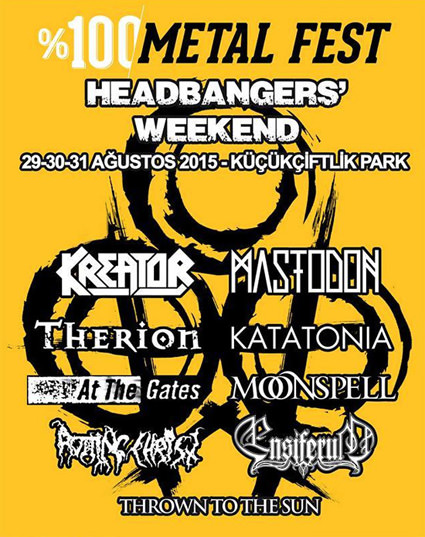 by Daily Sabah Aug 26, 2015 12:00 am
The toughest festival of the year, %100 Metal Fest Headbangers'Weekend will kick off on Aug. 29 for the third time at Küçükçiftlik Park. The festival's line up for this year is very exciting. European thrash metal giant Kreator, American progressive metal geniuses Mastodon, who released the most successful metal album of the year, Arch Enemy, who will visit Turkey for the first time, pioneers of gothic metal, Therion, Swedish at the Gates, Finish folk metal band Ensiferum, Moonspell, death metal legend Carcass, dark metal's most prestigious representatives Rotting Christ, Septicflesh, which released the best extreme metal album of 2014, and young metal band Svengali from Dubai will heat up the stage for three days. %100 Metal Fest Headbangers'Weekend will not only hosts international metal bands but also the best representatives of metal music in Turkey. Murder King, Pitch Black Process, Metalium, Thrown to the Sun, Soul Sacrifice, Kes, Vortex of Clutter, Athor and Chaosnerve will perform for three days for Istanbulites. %100 Metal Fest Headbangers'Weekend 2015, which welcomed high-profile bands in the previous years, such as Overkill, Children of Bodom, Epica, Dark Tranquility and Sonata Arctica, will be certainly the toughest festival of the year.