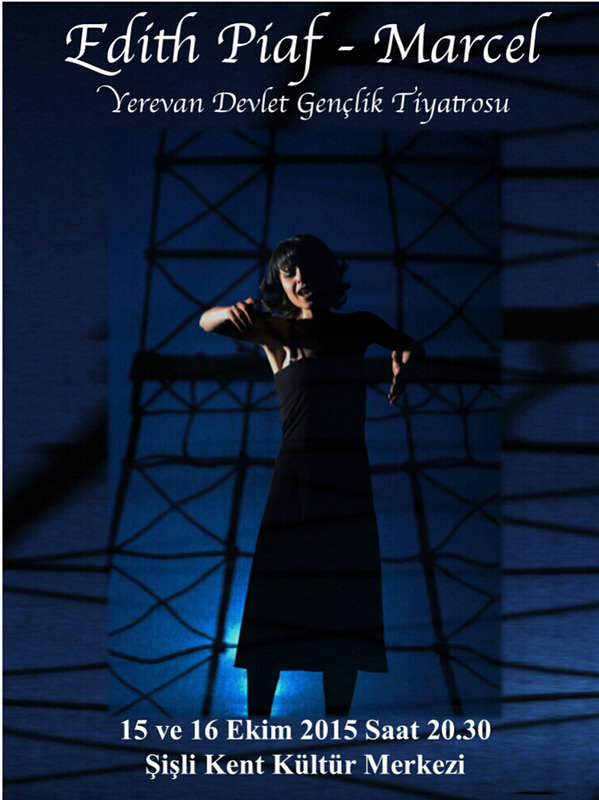 by Zeynep Esra İstanbullu Sep 30, 2015 12:00 am
The Yerevan State Youth Theater, invited by the Theater Painted Bird, will be performing in Istanbul for the first time with the play "Edith Piaf-Marcel" on Oct. 15 and Oct. 16. The play focuses on Piaf's love and longing for Marcel Cerdan. Theater Painted Bird celebrates its 15th birthday with "Edith Piaf-Marcel" on the 100th birthday of the legendary French singer Edith Piaf. Directed by Hagob Ghazanchyan, the play will be staged at Şişli Municipality Cultural Center. The protagonist is played by young award-winning actress Mariam Ghazanchyan. The play is significant in that it is the first Armenian production to be staged in Turkey.

French diva Edith Piaf, known as the Little Sparrow, was born in 1915. She started to sing on the street when she was a little child. After Louis Leplee, who ran a nightclub on the Champs-Elysees, discovered her talent, Piaf started her musical career. She then became one of the most loved singers in Europe and the entire world. She recorded more than 100 songs between 1933 and 1963 when she died. The musical, "Edith Piaf-Marcel" is based on the theme of Piaf's greatest love for world boxing champion Marcel Cerdan and the tragedy she went through after Marcel's death. Piaf creates a spiritual and imaginary world in order to communicate with Marcel after he dies in a plane crash in 1949. She tries to communicate with Marcel through her songs, each of which turns into a prayer. Mariam Ghazanchyan utters only one word throughout the play: "M-A-R-C-E-L!"
RELATED TOPICS