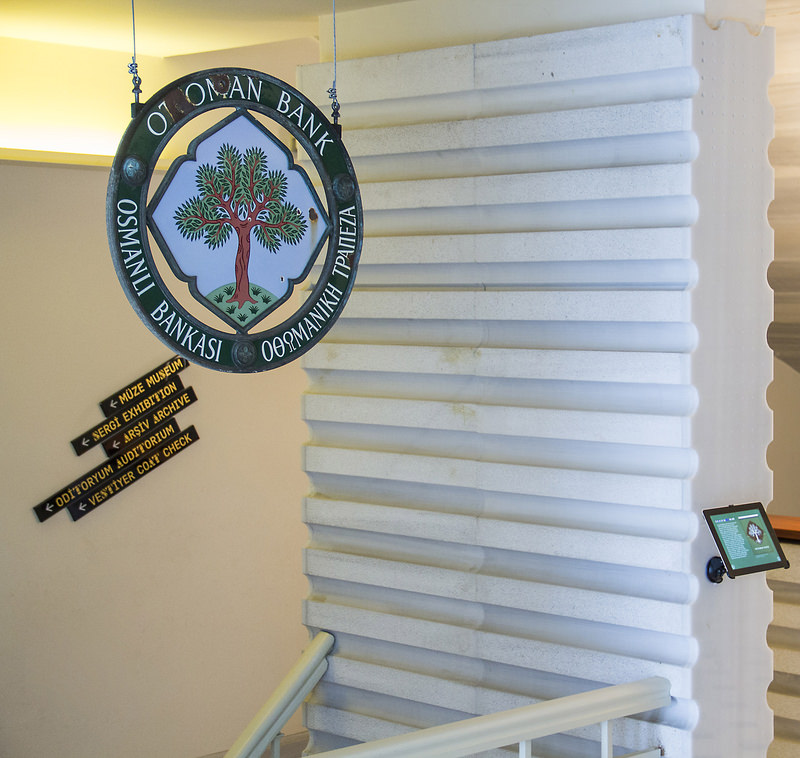 by Daily Sabah Oct 19, 2015 12:00 am
The sign of the Ottoman Bank Nicosia branch is now on display at SALT Galata. Re-discovered in Nicosia in February 2014 during a photography tour, the sign of the Ottoman Bank's Nicosia branch was likely made by a local artisan toward the end of the 1940s. The double-sided signs of the city branches in Cyprus were in place until 1963, at which point conflicts between Turks and Greeks affected the bank's business enough to cause the branch to move to a southern region of the city. The discarded sign was rescued from the garbage by an immigrant from Turkey, who rented a shop on the opposite side of the street in 1974. Stored in the shop on the border of the military zone in the Arabahmet quarter until 2014 and bought by Garanti Bank and the Directorate of the Turkish Republic of Northern Cyprus, the sign will now be on display at SALT Galata until October 2016. In 1947, the Ottoman Bank consulted Edmund Dulac, an orientalist designer of banknotes and stamps, to begin working on a new, distinct logo. The olive tree emblem was adopted after various discussions. According to a note written in 1958, the olive tree was chosen for a number of reasons: It is the symbol of productivity, protection, peace, tenacity and adaptability. Moreover, it is a plant native to all countries of the bank's territory. The three roots in the illustration reference the bank's institutional bases: Istanbul, London and Paris. The branches of the tree represent the branches of the bank as they expanded abroad, and the "window," an equilateral quadrangle found in endless variations in carpets, miniatures, screens, embroideries and interior and exterior architectural details in Islamic art, indicates the geography of the Middle East.