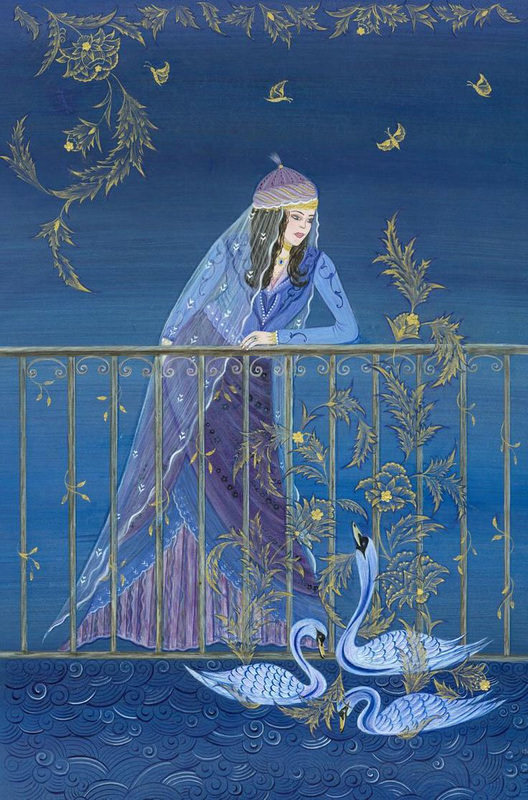 Speaking at the opening ceremony, Zeytinburnu Municipality Mayor Murat Aydın expressed his eagerness to host Çekin's work, thanking Zeytinburnu residents for the interest that they have shown the exhibition. "It was a dream to display the exhibitions of Istanbul's prominent artists in this district 10 years ago, and now we are hosting various art exhibitions in our district. I thank all the residents of Zeytinburnu for their support. Their love for art is empowering artists," Aydın said.

In her statement to Anadolu Agency, Çekin thanked Mayor Aydın for his support, saying, "The municipality published a catalogue for my exhibition, which was very kind of them. I thank the Zeytinburnu Municipality for offering local artists a chance to hold exhibitions." Çekin began practicing the art of painting miniatures under the supervision of artist Cahide Keskiner. In addition to art training in classical ornamentation and miniature, Çekin also studied art history. The artist says that she has always wanted to bring a breath of fresh air to the art of miniature, evident in her display of the innovative developments of miniature in her recent exhibition. "My aim has always been to make new contributions to the art of miniature without destroying its traditional style," said Çekin, who added that she creates artwork which tells unique stories using classical motifs.

Çekin underlined that "Earth and Sky" features the works she produced last year. "We have a tradition in miniature and we have to produce new things by utilizing this tradition. I believe that we need to attract the attention of art lovers to our traditional art forms."

Mehmet Lütfi Şen, the curator of "Earth and Sky," underscored that miniature artists should be innovative, in order to establish their place in the future of the art while practicing this traditional art form. He said that artists need to be well-versed in the old techniques in order to produce new artwork. "The exhibition is a retrospective of a work that is a quarter-century old. Instead of following the beaten path associated with the tradition, Çekin took bold steps to be innovative." Şen also paid respect to the late A. Süheyl Ünver as well as the late contemporary miniature artist Nusret Çolpan, who helped integrate the art of miniature to the contemporary arts. He also thanked Cahide Kesikiner for her article which is featured in the catalogue of the exhibition. Çekin's miniature exhibition "Earth and Sky" which features 23 works of the artist can be seen at the Zeytinburnu Municipality Art Center until Feb. 12.
RELATED TOPICS