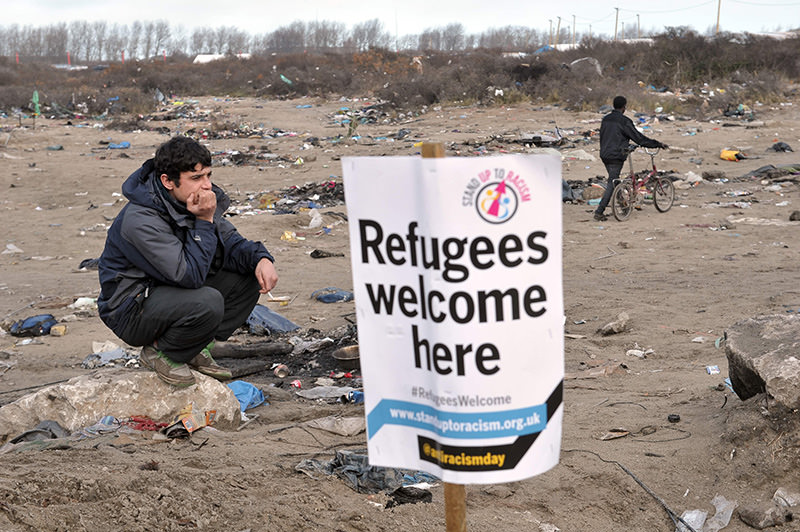 A migrant stands next to a banner on January 23, 2016 in the French port city of Calais, northern France (AFP)
by Daily Sabah with Wires Feb 03, 2016 12:00 am
Shakespeare's Globe theater company is staging "Hamlet" in a refugee camp in the French city of Calais, bringing the Bard's best-known play to some of the more than 4,000 people living in what is known as the "Jungle."

Wednesday's performance may be among the boldest shows by the Globe in its world-wide tour that began nearly two years ago on the 450th anniversary of Shakespeare's birth and ends back home in Britain this April, the 400th anniversary of his death.

The play is hosted by the Good Chance theater in the heart of the camp, one of numerous structures set up by volunteers to fill the void for displaced camp residents.

Dominic Dromgoole, the Globe's artistic director, said: "This performance will be yet another wonderful example of this ground-breaking tour's ability to reach displaced people across the world. It's a privilege that our Hamlet company have been able to perform in the Calais Jungle and our thanks go to Good Chance for enabling this."

In a joint statement Joe Murphy and Joe Robertson, the artistic directors of Good Chance, said: "The Good Chance Theatre welcomes people of all ages and nationalities to share in the different cultures and traditions that provide the only positive aspect of this situation. The production is a message of solidarity with the people here, and testament to the power of theatre to unite."

For most of the 4,000 inhabitants of the "Jungle", a shanty town on the sand dunes of France's north coast, the climax of each day is the nightly bid to sneak into the undersea tunnel they hope will lead to new life in Britain.

A few make it. But the vast majority face another day living with the squalor, disease and ever-present threat of violence in a place that, with Italy's Lampedusa or Greece's Lesbos, is the latest symbol of Europe's failure to manage migration.
Last Update: Feb 03, 2016 11:08 am
RELATED TOPICS