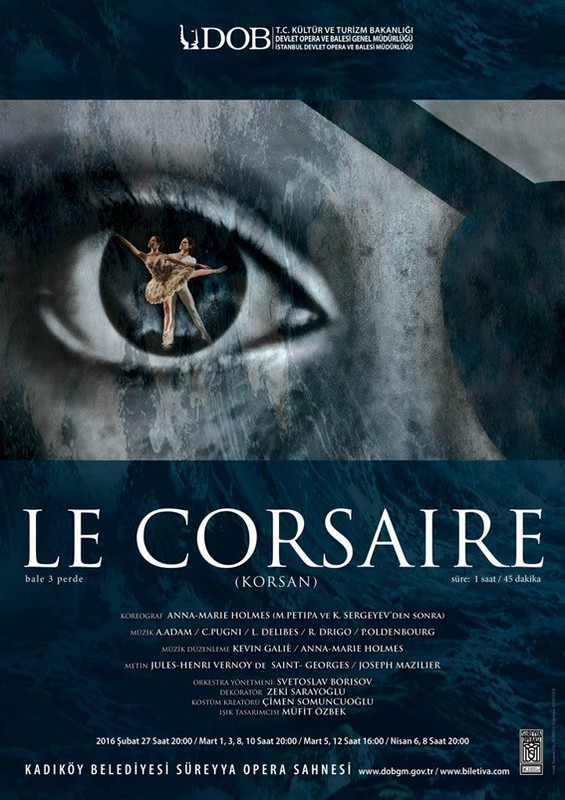 by Daily Sabah Feb 24, 2016 12:00 am
Istanbul State Opera and Ballet will perform the premiere of one of the biggest works in classical ballet, "Le Corsaire" (The Pirate), on Feb. 27. According to the statement released by the company, the ballet production, adapted from British poet Lord Byron's namesake poem, and co-written by Jules-Henri Vernoy de Saint-Georges and Joseph Mazilier, will be staged with the choreography of the Canadian "living legend of ballet," Anna-Marie Holmes, and music composed by Adolphe Adam, Cesare Pugni, Leo Delibes, Riccardo Drigo and Prince Oldenbourg. The production, whose orchestra will be conducted by Svetoslav Borisov, will feature costumes designed by Çimen Somuncuoğlu and a set designed by Zeki Sarayoğlu. The ballet is staged every other year at the American Ballet Theater with the choreography of Holmes.

The storyline of the ballet begins when Conrad set sail for Ottoman lands with pirates and his friend Birbanto. When they unload their goods on the dock, Conrad falls in love with one of the slave girls sold on the dock; however, Seyd Pasha chooses the girl to be his concubine. Considered as one of the most colorful and exiting ballets of all times, "Le Corsaire" premiered with the choreography of Joseph Mazilier on Jan. 23, 1856, in Paris. Following the premiere, the ballet was adapted by various choreographers in different European cities. The technically rich ballet production stands out with the group performances of male and female ballet dancers as well as "grand pas de deux" where three leading characters - Medora, Conrad and Ali - present their solo performances. "Le Corsaire" will continue to be staged at the Kadıköy Municipality Süreyya Opera Stage on March 3, 5, 8, 10 and 12 as well as April 6 and 8.