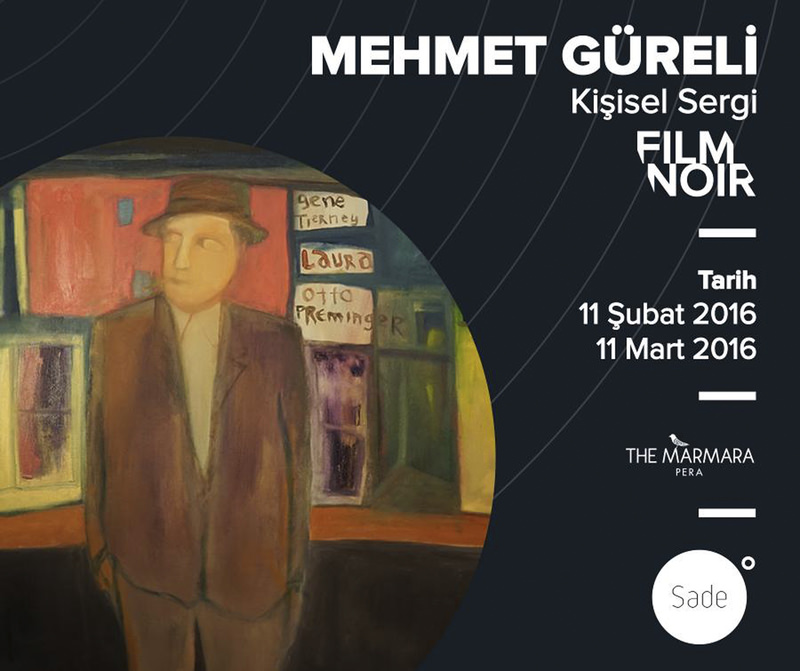 by Daily Sabah Feb 25, 2016 12:00 am
Sade Kolektif's third exhibition organized at the Marmara Pera is hosting artist Mehmet Güreli's solo display "Film Noir" until March 11. In his exhibition, Güreli manages the pull Film Noir out from the darkness and makes references to the films that entered cinematic history as well as the video recordings of Istanbul filmed in the 1930s. Güreli says creative works that take him to new worlds and encourage him to think more deeply excite him, and the artwork created as a part of the Film Noir movement as well as the surrounding period offer him that excitement. In Güreli's works, the artist sometimes hides messages in the eyes of the figures he paints or sometimes within the various minute details of the painting. Moreover, the male and female figures in the artist's paintings also symbolize characters such as the femme fatale, a detective or a murderer.

The paintings force the audience to think deeply about the stereotypical characters Güreli paints, and encourages the viewer to contemplate the possibilities and actions that the character might have taken previously before ending up in the art gallery. The atmosphere, lightning and surroundings of the characters in Güreli's paintings make the audience daydream about them. Suddenly, the viewers find themselves in a Film Noir-style film surrounded with the mysteries of light and shadow plays in the paintings. The novels he read and researches that he conducted constitute Güreli's "freedom space" where he can boldly paint. The colors that Güreli uses and the randomness of the usage of these colors are the secret of Güreli's artistic mastership.