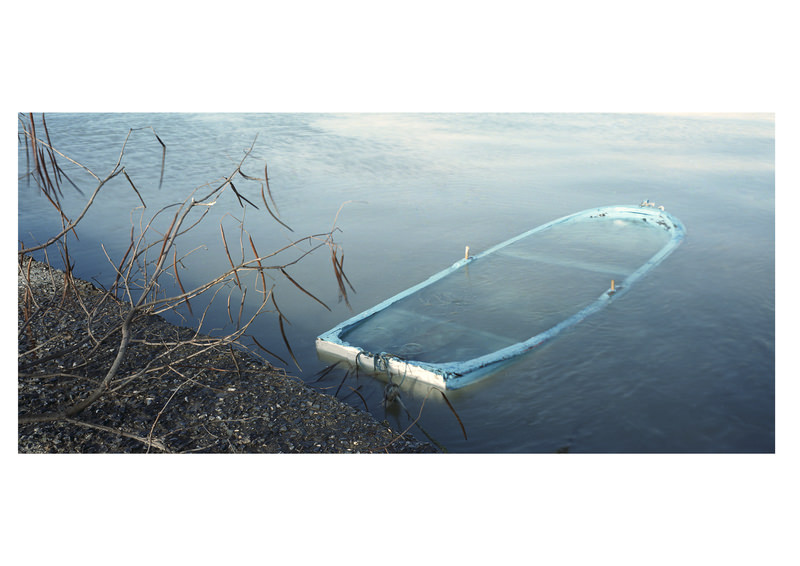 An afternoon not so long ago I visited the Milli Reasürans Art Gallery in Nişantaşı where I was startled by the image of a blue boat half sunk in the water. Hung on one of the gallery walls, this massive work was simply titled "Istanbul, 2007." This offered little in the way of explaining the work's theme or its strange, calming effect on me. As I moved back to appreciate the image in all its subtle beauty I was surprised to realize how it looked like a painting more than a photograph. It was as if a painter had produced a perfect likeness of an old boat and the blue water of the sea from which the boat seemed indiscernible.

So it came as no surprise to learn that the artist who produced the image, Arif Aşçı, had studied painting at the Fine Arts Academy. Aşçı's exhibition, "Yelkovan," which continues at the Milli Reasürans Art Gallery until April 15, features other equally subtle images with a deep, painterly quality. They seem beautifully out of place in a world where viewers are used to instant photography popularized by social media platforms like Instagram.

Born in Adana in 1958, Aşçı spent his youthful years focusing on art, photography and travel in Asia. He worked as a research associate at the State Academy of Fine Arts before embarking on a three-year trip in Asia. It was during this time that he became a photographer. He produced a 12-part documentary series titled "Turkuvaz" (Turquoise). In 1996 he went to China and traveled on the Silk Road. The outcome of this journey was the exhibition "The Silk Road," which went on display in Boston. Aşçı's "Istanbul-Panorama" exhibition was displayed at Seoul's Gallery Now and at the Halleport Museum in Brussels.

"Arif Aşçı is not a journalist," art consultant and writer Karoly Aliotti says in the exhibition catalog. "He isn't trying to draw attention to social problems. He is by no means a documentary photographer." Aliotti asked Aşçı about the reason why he had moved from painting to photography. "To wait for the distribution of roles in life, for life to setup its own theater, to pick the right moment in the right angle, to document that moment that will never be repeated," Aşçı explained. "Good art should be more than a bright idea; intuition, spirit, conscience ... this is a very specific blend and there needs to be that balance."

Another of Aşçı's photographs, "Istanbul, 2008" has that balance of intuition, spirit and conscience. It depicts the façade of an Istanbul house with a view of the city in the background. Both the house and the city seem still and silent in the image - qualities shared in many of the works on display here.

"The title 'Yelkovan' is a very specific choice: Yelkovan is the minute hand of the clock, of time passing - it's the fine tuning of time," Aliotti explains. "It is the reminder of minutes passing one by one. As we know that it is not possible to hold on the moments passing, 'Yelkovan' reminds us of the importance of living them, experiencing them, of feeling their emotions. In an interview, Arif Aşçı said that his only 'regret' was not to have kept a notebook when he was taking photographs. If we can't hold time, perhaps it's possible to make it permanent through experience."

At the entrance of the Milli Reasürans Art Gallery I came across a quote from Ahmet Hamdi Tanpınar's comic novel "The Time Regulation Institute," which focuses on the fleeting nature of time and art. "The clock is the space" it reads, "its passing is time, its tuning is the person ... which shows that time and space exist only with the person." This subjective understanding of time is the subject of another Tanpınar novel, "A Mind at Peace," in which the book's characters seem to exist in different time zones. For some, time moves very carefully and slowly while for others it is brutally fast paced.

Aşçı's photographs and Tanpınar's work provide an antidote to the chaotic world of Istanbul. The novelist had once emphasized the importance of pausing in order to be able to reflect on the world. The photographer seems to have taken his advice.

"In order to enjoy these photographs, you need to know how to stop," Aliotti explains, echoing Tanpınar. "You need to look for a long time at the way the yellow plastic roof shines with light. You need to pay attention to the oranges that appear in its reflections on the wall. You need to remember light means color and color means light. You need to remember that all of the nuances of color and light include an infinity. When light hits the red wall, each section of the wall containing a different tone - carmine, vermilion, scarlet, terracotta - needs to be experienced beyond just noticing. Just like the scene about Rothko in John Logan's play 'What is red? The red in Delacroix's painting of the French flag? A lobster's red? A tulip? A pepper? The red of traffic lights? Sneaker red? Devil red? Stop sign, Russian flag, Chinese flag? Wine? Blood? Sunset, pomegranate, Santa Claus? Ruby red or the dresses in El Greco's paintings? Heartbeat, passion, lipstick, lava? A rabbit's nose, an albino's eye? The color of Tiziano's paintings? Just red ...' "
Last Update: Apr 01, 2016 11:12 pm
RELATED TOPICS