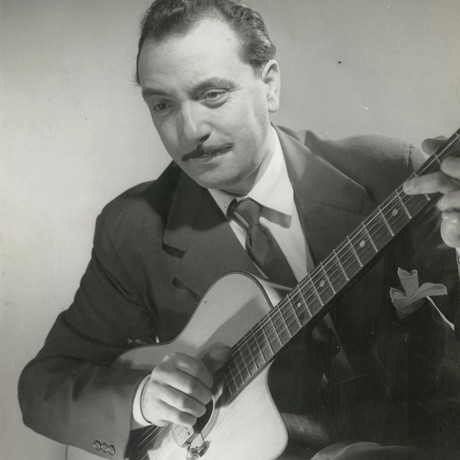 Django Reinhardt
by daily sabah May 25, 2016 12:00 am
Organized with the collaboration of nuDC and Salon, the initiative of the Istanbul Foundation for Culture and Arts (İKSV), the "Garanti Jazz Green: Jazz Tree" concert series will commemorate late guitar legends this summer. On May 27, Garanti Jazz Green will pay its respects to late guitarist Wes Montgomery. Garanti Jazz Green commemorates the legends of jazz every year. In 2011, Jazz Green organized a concert series commemorating Billie Holiday, Ella Fitzgerald and Nina Simone. In 2012, the organization hailed Frank Sinatra, Ray Charles and Antonio Carlos Jobim. Salon was a home for a tribute to Cole Porter, George Gershwin and Duke Ellington in 2013. When it came to 2014, the masters of trumpet, Miles Davis, Louis Armstrong and Chet Baker, were remembered through a series of concerts. Istanbulite music lovers paid their respects to the saxophone virtuosos Charlie Parker, Stan Getz and John Coltrane in 2015. The 2016 concert series, which kicked off with the commemoration concerts for Joe Pass, will continue with Montgomery, who is one of the biggest sources of inspiration for jazz guitarists.