In Istanbul Modern, an ambitious show on photography in Turkey 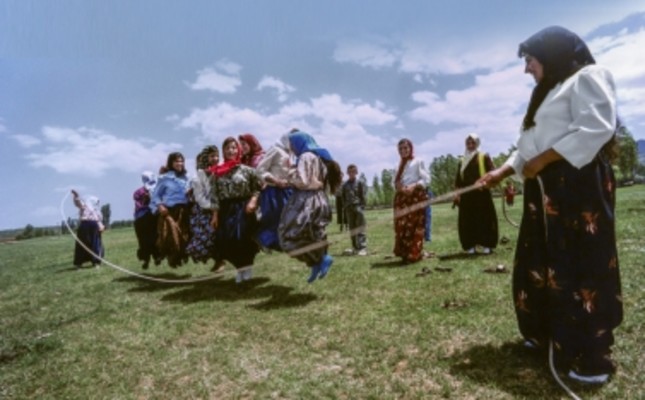 Istanbul Modern's new photography exhibition ‘People Attract People' showcases photographs by 80 artists shot over a period of 80 years. The show's curator Merih Akoğul spoke to Daily Sabah about his working methods and landmarks in the history of Turkish photography

If you visit the basement floor of Istanbul Modern this summer, you will come across a hall devoted to photography in Turkey. Running until Dec. 18, "People Attract People" attracts visitors on the lookout for the surprising revelation, the humorous detail and the subtle angle that turns an ordinary moment into a striking artwork. 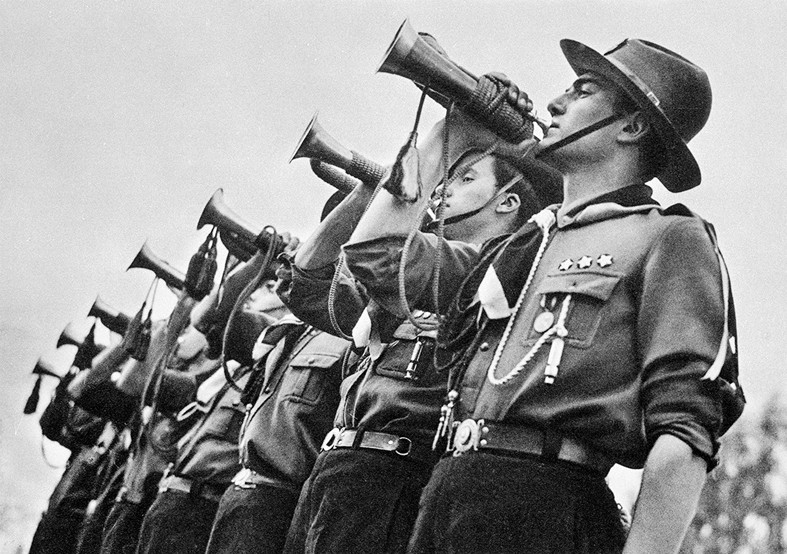 The exhibition opens with works by Othmar Pferschy, a leading figure of documentary photography in the Republican era. Born in Austria in 1898, Pferschy worked as an assistant to Romanian Jewish artist Jean Weinberg and then opened his Istanbul studio in 1931. After his death, Pferschy's archive had been bequeathed to Istanbul Modern by his daughter.

Pferschy's photographs of girls working with typewriters in a classroom and boy scouts in uniforms are bold, modernist and iconic. "Othmar Pferschy was one of the leading exponents of documentary photography in the Republican era who introduced the developing and revitalized face of young Turkey to the world," the exhibition catalogue informs us. 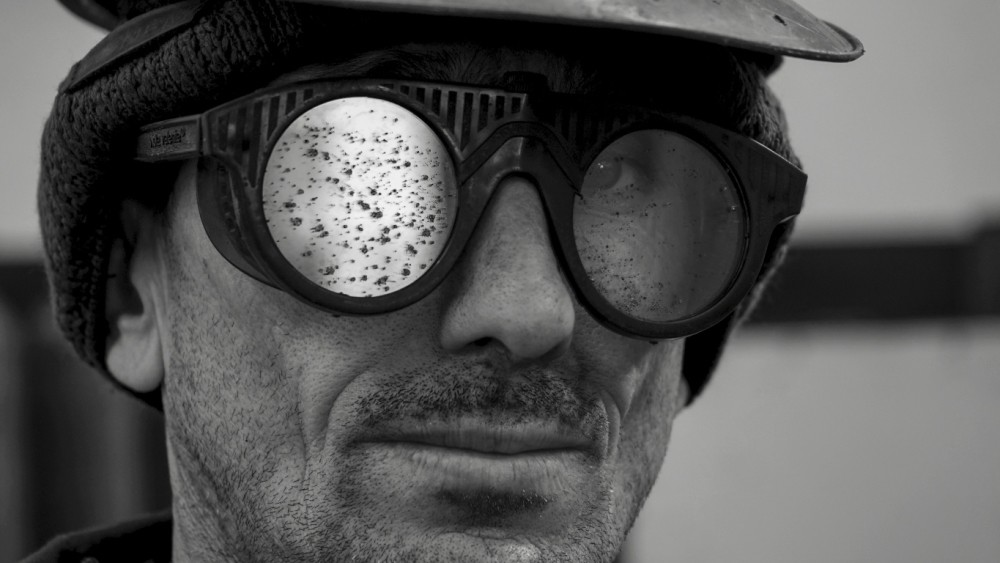 Photography studios opened in Istanbul's Pera district played a crucial role in the development of photography in Turkey. A similarly defining factor was Vedat Nedim Tör, head of the General Directorate of the Press, who worked with Pferschy to promote a new image of Turkey. "The use of Pferschy's meticulously taken photographs in books, magazines, banknotes, and stamps laid the foundations of a tradition that has virtually continued into our day. The subsequent photography personnel in particular would take the precision and meticulousness of these photographs as a model. In landscape photography, at first photographers were inclined toward Turkey's natural and historical fabric, and later toward the daily life of the newly developing big cities, primarily Istanbul."

"There was great excitement when the General Directorate of the Press found Pferschy thanks to Vedat Nedim Tör," the show's curator Merih Akoğul told me in an interview last week. "Up to that date, there was no photographer who could record the new republic of Turkey in a way matching its image technically and aesthetically," he said. "It was only after this initiative that Turkey's changing face became visible in the West. Photographers who came after Othmar took the compositions and the technical mastery of his photographs as their model."

Akoğul recalled how he came up with "People Attract People," the title of the exhibition. "The title comes from a friend of mine who told me a story about 35 years ago. One night, in a deserted square, an elderly men stepped on my friend's foot and told him: 'Well, people attract people' before disappearing into the night. I used this mysterious story for the title of this exhibition, and my starting point was the Turkish verb 'çekmek.' When a photographer takes a picture, she makes a choice. While making this choice her camera is directed to one object or subject among numerous others in a mysterious way. The law of attraction in the universe applies to people as well. The choices made by the photographer point to the existence of a special space of attraction in between people."

"People radiate energy and photographers capture this energy," Akoğul is quoted as saying in the catalogue. "Beyond simply taking pictures, photography requires seeing the energy radiated by people and reflecting that energy. While the exhibition sheds light on different periods, it also presents, in a harmonious and integrated manner, snapshots taken through the eyes of artists, journalists, and academics." 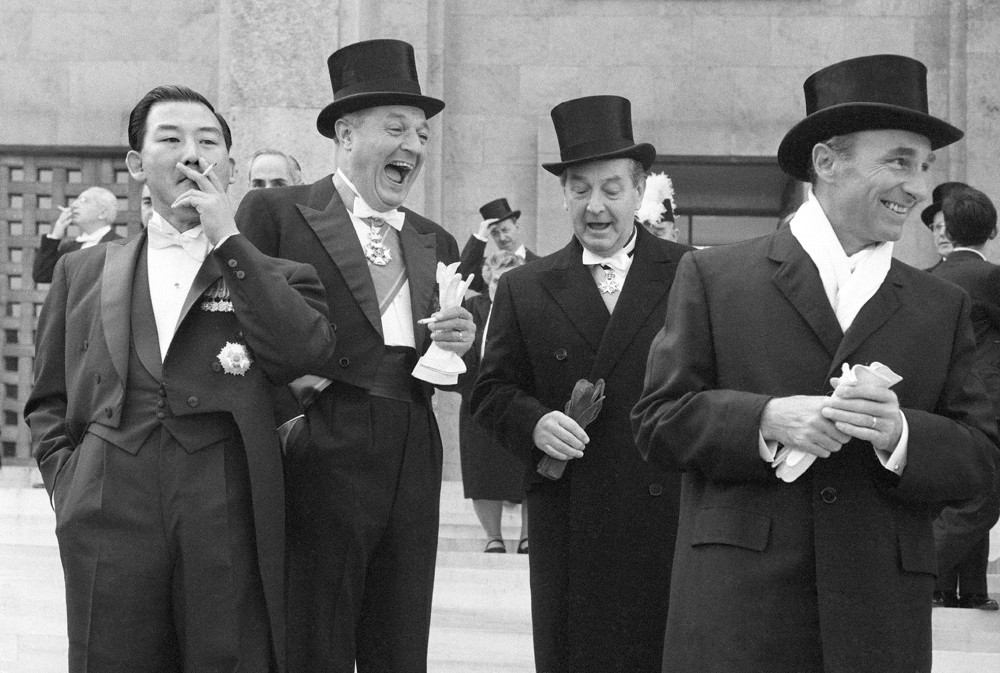 Next to Pferschy's "Fishermen on the Golden Horn" (1955) I came across photographs of Mustafa Kemal Atatürk, taken by Kemal Aydoğan ("Atatürk in the Clouds," 1953) and another work taken on Oct. 29, 1933. Four photographs by Selahattin Giz, whose images of Istanbul's daily life had attracted so much attention in the past decade, give us details of urban Istanbul: a street vendor, a beautiful lady getting on a tram, a warm couple photographed in front of a snowy background and three men working inside an office. Ozan Sağdıç's "Diplomats," featuring four foreign diplomats enjoying a moment in their tuxedos, is another highlight of the exhibition.

Akoğul told me about landmarks and turning points he discerns in the history of Turkey's photography. "The era that begins with Othmar is one landmark," he said. "The second half of the 1950s when the successful photographs of Ara Güler emerged, is another. It took 20 years to acknowledge this era and give a name to it. This era saw the emergence of 10 photographers who started taking pictures after the 1960s and made a name for themselves in the 1970s. They took pictures of the Anatolian life, landscapes, archeological sites and in the old villages and historical places of big cities," Akoğul explained. "But the most important movement in photography in Turkey came with the 1980 generation and the generation that came after them. They created a rapture and defined the photography of our day. During this era, the theory of photography came to the fore and there were photographs of ideas. Thanks to the developing technologies, photographers became more aware of international names. After the 1990s, a whole new dimension came to the art of photography with the digital revolution."

For Akoğul, curating this show proved to be a pleasurable challenge. "I worked on the show for about six months," he said. "Before that, I had been researching photography in Turkey for many years, wrote numerous articles and books on the subject. This is no easy job. You need to give it the time it demands and deserves. I am very meticulous. In order to create the concept in my head and reach the right synergy, I needed to create a balance between the images. So I conducted lengthy meetings with photographers who are alive and also with the relatives of the deceased ones. I was the one who would decide how the images would be displayed in the exhibition hall and inside the book. I was immensely helped by the museum team in this challenge and that was a great comfort."