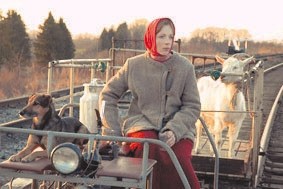 by Daily Sabah Mar 16, 2017 12:00 am
Pera Museum is to screen Russian director Vera Storozheva's 2007 film "Travelling with Pets." Promising few words and more imagery, the film starts simultaneously with birth and death. Natalia's husband, who "bought" her from an orphanage when she was 16, dies when he is trying to sell milk to a moving train.

However, this is the first time Natalia feels alone, independent and free in her life and she starts building herself a new future. She redecorates the house, sets her husband's things on fire, includes a mirror, a flat screen and photographs of Western movie stars cut out from magazines in her life. Storozheva, whom you will remember from the movies of acclaimed director Kira Muratova, is now in the director's seat.

Natalia's awakening is reflected on the screen together with a soundtrack in which creaky, irregular and mechanical noises are transformed into harmonious and natural sounds. The color pallet of cinematographer Oleg Lukichev, where grays of summer are transformed into the colors of the spring, also create a great atmosphere. "Travelling with Pets" is an example of feminist cinema and displays the great acting of Kseniya Kutepova and her character Natalia.