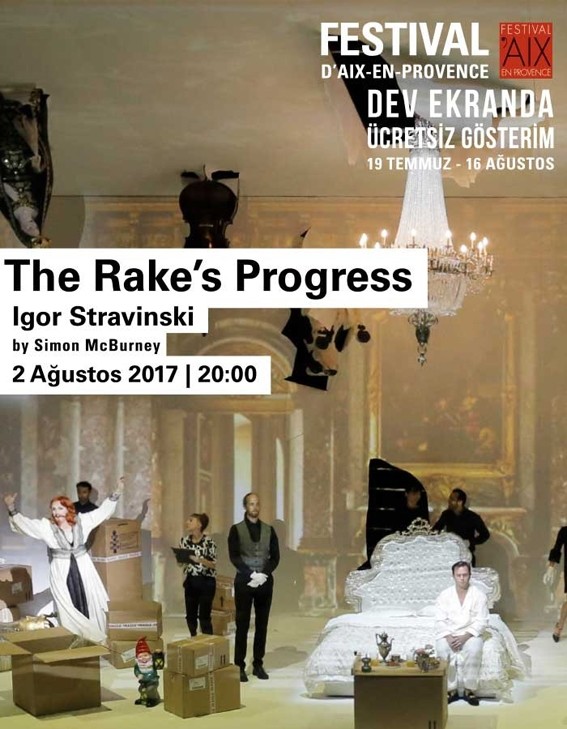 Settling in the U.S. after World War II, Igor Stravinsky discovered English artist William Hogarth's painting series known as "A Rake's Progress." The paintings depict the life of a freedom fighter in England in the 18th century in realistic, satirical detail. Stravinsky turned this series into an opera. The libretto written by Wystan Hugh Auden and Chester Kallman narrates Tom Rawewell's traitorous soul, adding Nick Shadow's Mephistophelian figure. The fighter finds himself at a mental institution after a journey bringing him from a brothel to an auction house. The musical style is reminiscent Mozart and also references Gioacchino Rossini, Guiseppe Verdi and George Frideric Handel. While renowned modern scriptwriter Simon Mcburney re-interprets "A Rake's Progress," he reveals the layers of Stravinsky's work.

The most prominent work at the Aix-en-Provence Festival will be presented free of charge on the giant open-air screen of Zorlu Performing Arts Center (PSM) Theater in cooperation with Istanbul French Cultural Center until Aug. 16. Founded as a festival focusing on music as an addition to the Cannes Film Festival and Avignon Theater Festival after World War II, the Aix-en-Provence Festival was held between July 3 and July 22 this year. "Pinocchio," "Carmen," "The Rake's Progress," "Don Giovanni" and "Erismena" from the works that were screened at the festival this year will be screened for free on Zorlu PSM Theater's giant screen.