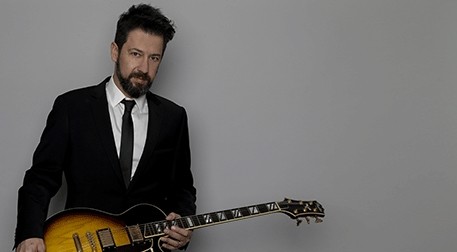 The first Turkish musician to have been accepted to the Royal Conservatory The Hague's Department of Jazz Guitar Studies, Onur Ataman (above) will meet music lovers on the stage of Akbank Art on Wednesday, Sept. 27, 2017. The famous guitarist will be accompanied by saxophonist Fabrizio Scrafelli, known for his worldwide appearances in concerts abroad, and pianist Barış Mert. Ataman will be also accompanied by Jonathan Ihlenfeld on the bass guitar and drummer Monika Bulanda. Onur Ataman was accepted to the Royal Conservatory The Hague's Department of Jazz Guitar Studies in 2001 as the first Turkish musician ever after having completed his education at Istanbul University's State Conservatory in 1995. In 2006, he earned the Top Talent Scholarship, which is given by the government of Holland to gifted and talented students. The artist finished his Bachelor's degree and Master's degree at the same school as an honor student before continuing his doctoral studies for two years at Leiden University in Holland and the Orpheus Institute in Ghent province of Belgium. During his doctoral studies at the Oxford Music Faculty and the Royal College of Music in England, his research focused on the integration of Turkish and jazz music. Ataman has worked with a number of famous jazz musicians throughout his music career, giving various concerts in Europe and Turkey under the roof of Onur Ataman Ensemble and Istanbul Connection, and has made appearances at many festivals including the North Sea Jazz Festival, the Istanbul Jazz Festival, the Delft Jazz Festival and the Turkey Now Festival in Amsterdam.