Discover details of the exhibition on Ottoman manuscripts 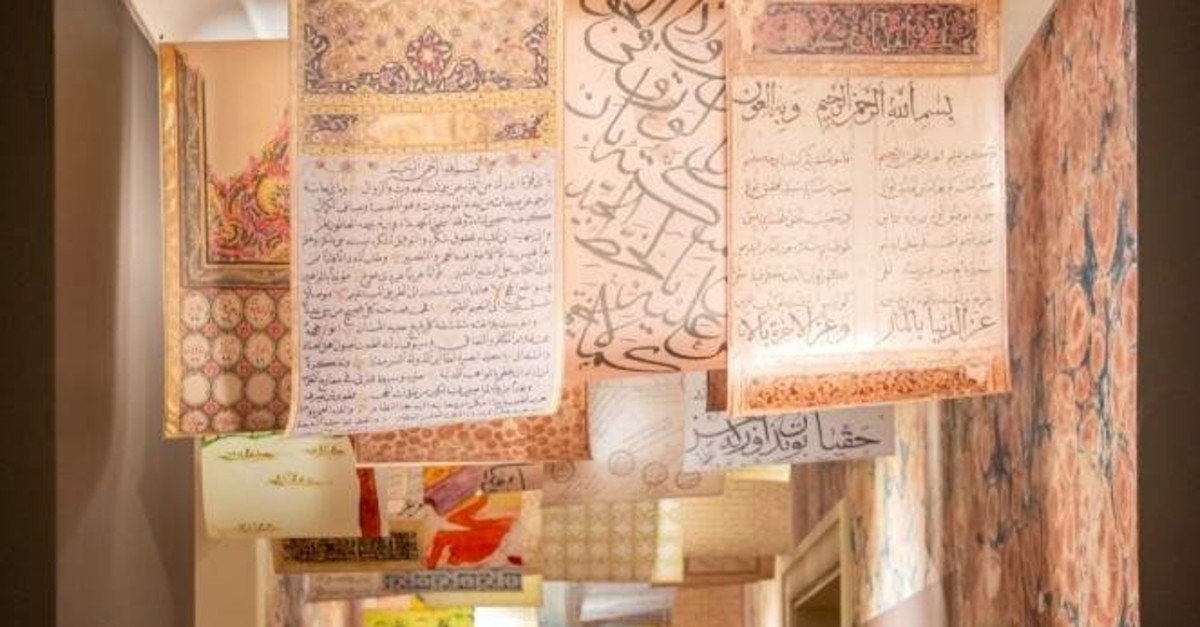 Visitors take a journey among texts, objects and history through Ottoman manuscripts in the exhibition.
by İREM YAŞAR Nov 03, 2019 4:53 pm
The Istanbul Research Institute invites visitors to explore the fascinating history of Ottoman manuscripts. The institute's latest exhibition, “Memories of Humankind: Stories from the Ottoman Manuscripts,” offers a glimpse of Ottoman manuscript culture, inviting discussion on the multilayered cultural value such texts offer around a century after the empire collapsed and Latin script was introduced. The exhibition shows how the culture of hand-written manuscripts had already suffered due to the widespread growth in use of the printing press in the 19th century. Manuscripts eventually ceased to be considered a valid media for the presentation of information, fiction, or spiritual teaching for the masses of the 20th century, only attracting the interest of collectors.
With the advent of print, it was the book that would become the new source of knowledge and literary value. Significantly, this saw the end of the culture of "marginalia" - or, the notes written in the margins of a text by one, or several later readers of one particular copy of a manuscript. This was enforced by libraries, who punished members for scrawling in their books, rendering the text of the author untouchable and unalterable. Modern historiography’s relationship with manuscripts was also affected by these changed conditions. Literature came to be shaped by the quest for the ‘most accurate’ text, the ‘most valuable’ binding, and the ‘cleanest’ copy, whereas previously, manuscript culture was located in a far more collective spirit of literacy. Texts changed in the hands of copyists and readers, and these changes could be traced physically on paper, where readers and authors engaged in a dialogue between lines and in margins. Reading was an act as collective as writing; with people reading popular stories aloud in coffeehouses, and a dialogue emerging between readers responding to the notes of previous readers.
The “Memories of Humankind” exhibition harnesses new perspectives to allow visitors to better understand the collective literary culture and the multilayered world represented by early manuscripts. Visitors can expect to find multiple Ottoman script, considering the history of the texts as one of open-ended creations in motion. Examples include texts by the likes of İbrahim Ağa, the guardian of Van Citadel, who found time to copy manuscripts while on duty; Zübeyde Hanım, whose divan poetry was widely circulated; Yirmisekiz Çelebi Mehmed Efendi, the Ottoman Ambassador to France, who enjoyed correcting many of the manuscripts he owned; Enderunlu Fâzıl, whose writings were scolded and censored, but still made the rounds through word of mouth; and hundreds more, famed or anonymous.
The exhibition can be viewed until 25 July 2020. The Istanbul Research Institute is free to view Monday to Friday from 09:00 a.m. to 05.30 p.m. and on Saturdays between 10:30 a.m. -05.00 p.m. Although the exhibition is open on Wednesdays until 08.00 p.m.
Last Update: Dec 20, 2019 1:24 am
RELATED TOPICS