Odyssey of an Italian painter in Istanbul 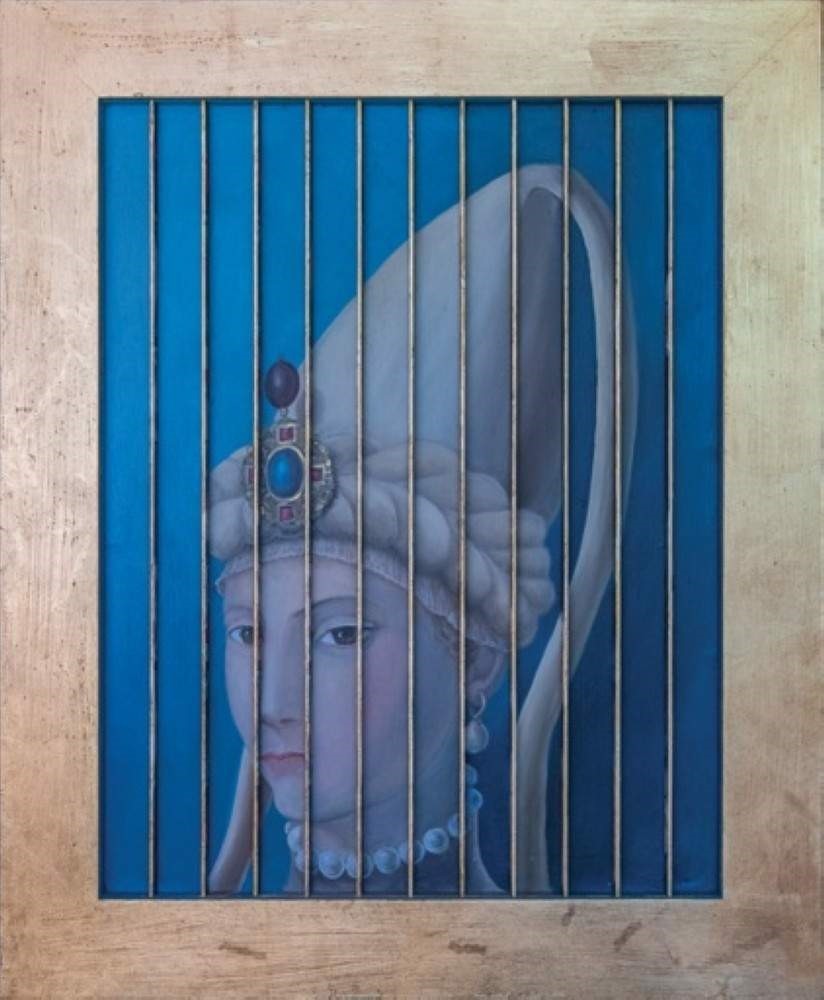 Lithian Ricci portrays Ottoman women and their styles of dress, combining them with her own Italian perspective, in her latest 'Esinti' exhibit on display in Üsküdar until Jan. 5

It was 2013 when Lithian Ricci first came to Istanbul to open a solo exhibition at Maçka Modern Art Gallery in Beşiktaş district as part of the 13th Istanbul Biennial. Having opened and attended many shows in Italy before, the artist prepared for nine months for this exhibition, which was an imaginary journey between Italy and Turkey. Following the show, Ricci’s journey started in the city. She first bought a house in this metropolis, which she loved at first sight, and then began spending half of the year there while living in Milano the other half.

Speaking to Daily Sabah, Ricci talked about the details of this first exhibition, which made her open up to Turkey. Noting that there are various connections between Italy and Turkey, the artist remarked that these connections are what attracted her to making art in Turkey. “Venice and other certain cities in Italy are deeply connected to Turkish history, from Byzantines to Ottomans. The two countries share common grounds in many fields, even including fashion.”

Starting with this point of view, Lithian Ricci prepared a new exhibit “Esinti” (“Breeze”), comprising of 10 portraits of Ottoman women in traditional clothes. Curated by Yasemin Aslan Bakiri and opened with the support of Gülsüm Hasbal, the culture and art director of Üsküdar municipality, the show will be on display at Nev Gallery of Nevmekan Sahil between Nov. 8 and Jan. 5.

Mentioning that the venue where her works of art are exhibited generally affects her productions, Ricci stated that the historical aspect of Üsküdar also directed her to find the theme of this exhibition. On the entrance floor of the space, drawings of huge sizes will welcome art enthusiasts. After their mesmerizing effects, Ottoman women’s three-dimensional portraits will salute them downstairs. The portraits are positioned like the women are in a box, which provides a different image from different angles. It is not surprising that the works are created with a very unique perspective as she has a background in architecture.

Born to a mother who was a painter, Ricci always lived in art. However, her initial education was in architecture. Remarking that she was working both as an architect and artist, she said that she had to choose one after a while. Choosing art, Ricci worked hard, tried various painting techniques to learn and discovered her own style in art. Preferring to work with oil paints mostly in recent times, the artist says that she also uses velature, which is an old technique.

Her background in architecture helped her develop new points of view.

However, Ricci says that group working is basic in this field. She got used to working in groups during her architecture periods. When she chose to sustain her career in art, the most challenging part was to work alone in front of the canvas for her.

“It is a very lonely kind of profession. You have so much time to think which is both good and bad in different aspects. Surely, it is important to love what you do. If you love your profession, you can face up all difficulties like I have done.”

As she has deep Italian roots, Lithian Ricci is naturally impressed by the Renaissance period, which includes artistic work produced during the period extending roughly from the 1860s to the 1970s, the 19th-century movement in Italy. She says that what she tries to do with her art is to transmit stories. She believes that these stories make art lovers feel emotions. “For me, the basic role of all artists is to bring beauty. What is life without beauty? Beauty is the basis of life. So, the role of artists in society is necessary and vital somehow. If I see a painting by a painter that I like, I feel some emotions. It is the same with other art fields like literature and cinema. If you are moved by a piece of art, it is very precious. This is surely what all artists try to do.”

Highlighting that she has tried to reflect an imaginary story about portrayers in her latest exhibit, Ricci continued, “The viewers do not necessarily understand the story behind my artworks. I think some stories and try to paint them on my canvas. However, they should invent new stories by examining and interpreting them.”

Talking about her creative process, the artist also added that the research period before performing her art is very important for her production even though she said she has worked freer recently. Generally, she first does some research and reads books of all types. Then, she picks the subject that draws her attention and sets about to create authentic results.

In her latest exhibit “Esinti,” the artist, who says she feeds on the energy of the Bosporus, the beauty and dynamics of Istanbul, has chosen to present Ottoman women wearing traditional clothes from an Italian perspective. Pay a visit to the show in Üsküdar to witness the original works by this artist who is deeply in love with Istanbul.