'BASE' OF YOUNG ARTISTS UP FOR THIRD TIME 'NOW' 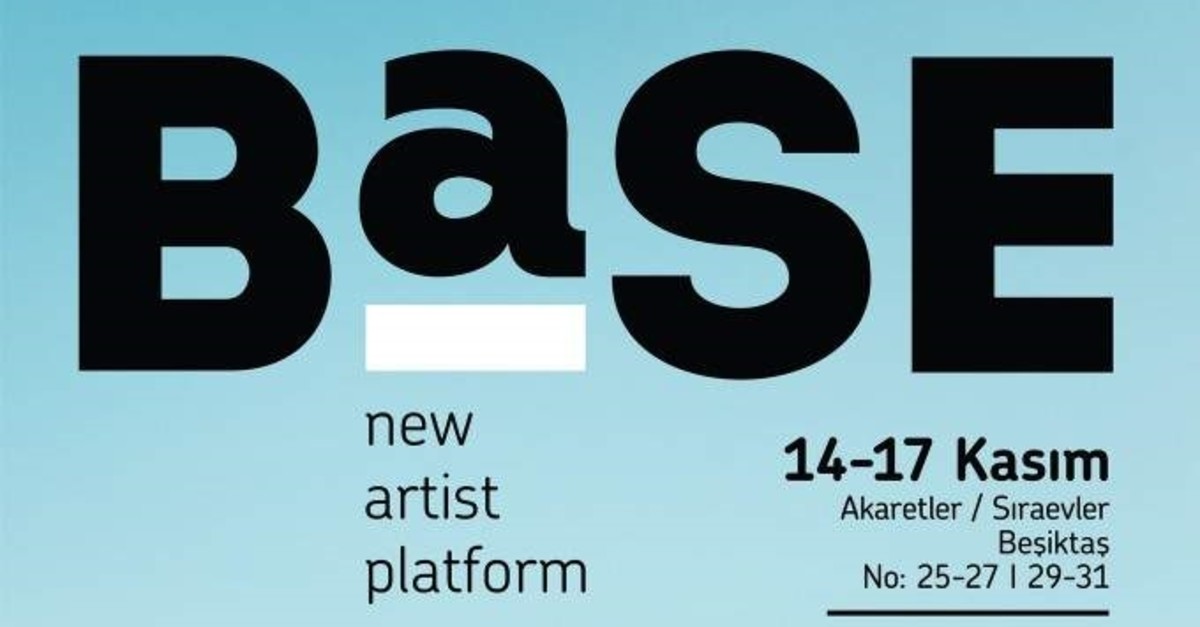 The first collective exhibition for new graduates of fine art faculties in Turkey, BASE Istanbul, is in the city for the third time with the theme 'Now'

Founded by Ali Kerem Bilge, Aslı Boduroğlu and İdil Berkant Bilge, art platform BASE has been bringing together newly graduated artists from all over Turkey with art lovers at Akaretler Sıraevler, the collective housing in Istanbul’s Beşiktaş district, for three years. This year's exhibition opened on Nov. 14 and will see the participation of 107 new graduates from 20 cities and 30 universities, it will run until Nov. 17.
Taking place at Akaretler Sıraevler No. 25, 27, 29 and 31, the show has gathered works by young graduates from all over the country under the same roof.
BASE received 1,575 applications from the 2019 graduates of 72 universities this year and features 119 works by the 107 new graduate artists. The BASE 2019 selection committee included Antonio Cosentino, Azra Tüzünoğlu, Derya Yücel, Elif Uras, Kezban Arca Batıbeki, Lalin Akalan, Marcus Graf, Merih Akoğul, Mustafa Taviloğlu, Nazlı Pektaş, Osman Dinç, Selman Bilal, Şakir Gökçebağ, Sabiha Kurtulmuş, Tankut Aykut, Tomur Atagök and Vahit Tuna.
This special event showcases works from many different art disciplines including painting, ceramics, video, sculpture, installation, photography, glass and graphic design. The exhibition has been curated by Derya Yücel since its first edition. Yücel has been actively curating exhibitions since 2005 and also continues her career as an art writer. She has published five monographs about renowned artists like Semiha Berksoy to date. On top of that, she is an academic at Istanbul Bilgi University’s Art and Culture Management Department.
Speaking to Daily Sabah, the curator told the story of BASE Istanbul. “After the establishment of the platform, I started to collaborate with the founders. I was so excited when I first heard about the project. Since I am in the academic world as a lecturer, I always follow young artists, their creative process and productions,” she stated. The founders and the curator formed a team and prepared an exhibit that will host new graduates of the year.
At BASE Istanbul, artwork by young artists is selected by a jury. Then, Yücel presents the works by collecting them within the frame of a subject. “We host 107 artists whose content, form and discipline are different this year. However, I also see their intersecting points. For example, their subjects and artistic aesthetics show some similarities. I apply my curatorial practice upon these intersecting points.”
Yücel defined the curatorial framework of BASE as “Now” this year. She said: "If time is an uninterrupted, dynamic and non-recurring phenomenon moving from one point to another, then ‘now’ is the moment that connects the past and the future, and at the same time forms boundaries with them. ‘Now’ is the continuity and connection of time, the memory of the past and the possibilities of the future. ‘Now’ is the moment where the past meets the future. Art, as a form of knowledge, transfers traces of the past to the future through ‘now.’ I wanted to share the perspective on how the artists at BASE 2019 look at their present time.”
Proposed as a top topic for BASE 2019 selection, "Now" shares the works by the new generation of artists, which naturally center their own world and their "now" and encompasses conceptual, aesthetic and sometimes political orientations such as cultural identity, social memory, personal mythology and fictional self and engulfs various media. It produces a polyphonic, multiple-meaning and dynamic visual encounter, offers a broad, current and contemporary spectrum of visual art education and practices in Turkey.
Highlighting the importance of BASE, Yücel said that half of the graduates of fine art faculties stop art production, and this is something that happens the world over. “Over time art productions decreases, only 10 % continue [of graduates] to make art. However, platforms like BASE carry great importance in terms of supporting artists’ productions and being a resistance point for them.”
Supported by the Ministry of Culture and Tourism, co-sponsored by Kale Group, Magnum and TEB Private Banking and partnered by Digilogue in arts, the three-day BASE also hosts the "BASE Talks" conference program and workshops with distinguished names of the world of art. Aiming to support young artist candidates in their transition from graduation to professional art life, to exhibit their productions and to introduce them to the leading figures of the art world, BASE also intends to be instrumental for art lovers and creative industries in discovering young talents.
A first at BASE
The BASELECTED exhibition, which will be held for the first time this year, will host a selection of contemporary works by 2017 and 2018 BASE artists. The exhibition will feature the works by 17 artists: Arek Qadrra, Aytuğ Aykut, Damla Yalçın, Dilara Göl, Duygu Aydoğan, Ece Kibaroğlu, Fatih Temiz, Hamza Kırbaş, Hina Barlas, İbrahim Erdoğan, Kübra Boy, Metin Alper Kurt, Ömer Sedat Yenidoğan, Seçil Büyükkan, Selen Tokgöz, Tevfik Altan Doyran and Uğur Bişirici.
Three days of BASE Talks
"BASE Talks," which attracted great attention last year, brings together the world of art with its program and special interviews at W Studios on Nov. 14-16. "BASE Talks," which hosts approximately 35 speakers on nearly 20 panels, runs from 11 a.m. to 7 p.m.
This year’s program includes Alp İşmen, Atıf Akın, Ayça Telgeren, Bengü Gün, Beral Madra, Derya Yücel, Emre Zeytinoğlu, Erdil Yaşaroğlu, Ferhan İstanbullu, Guido Casaretto, Hüsamettin Koçan, Kezban Arca Batıbeki, Leyla Ünsal, Merih Akoğul, Murat Pilevneli, Ozan Bilgiseren, Pınar Öğrenci, Sabiha Kurtulmuş, Sarp Evliyagil, Selman Bilal, Sibel Erdamar, Sinan Demirtaş and Vahap Avşar. The detailed program of the event is available on the website of BASE 2019.
Last Update: Dec 20, 2019 1:42 am
RELATED TOPICS