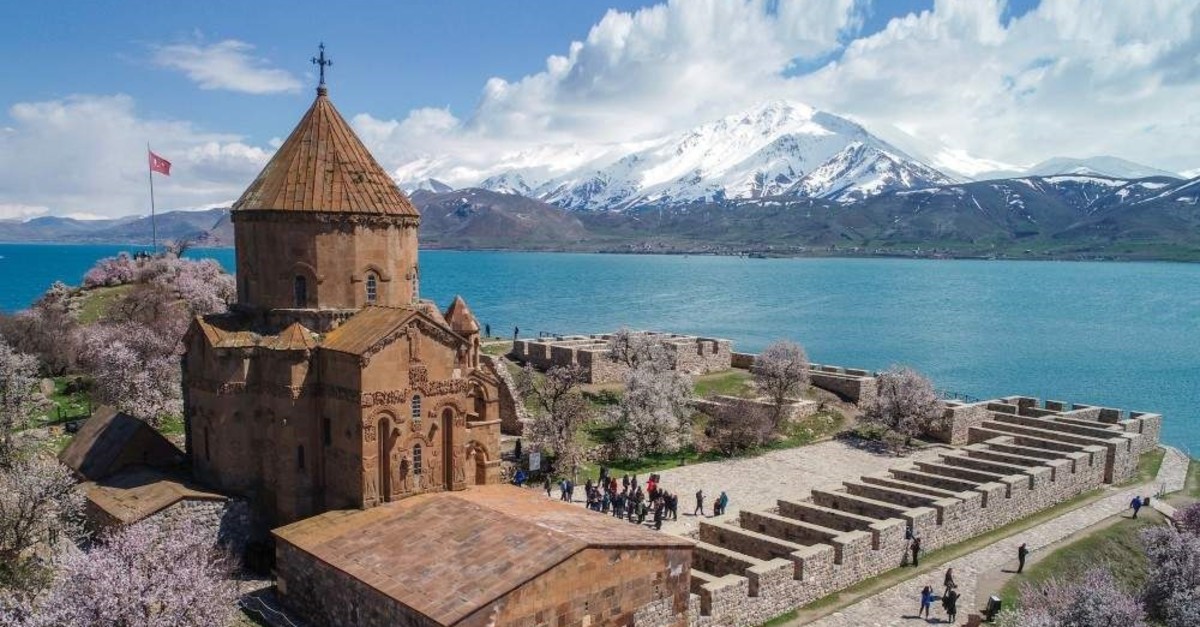 The exhibition presents photos of the church's works and views. (AA Photo )
by Daily Sabah Dec 02, 2019 3:16 pm
The Akdamar Church of the Holy Cross Photo Exhibition, organized by the Turkish Presidency Communications Office, met art lovers Monday at the Noho Showrooms in London at 7 p.m. for its next stop following shows in Istanbul Hagia Irene Church and New York.
As an important part and witness of the Anatolian lands that hosted the Phrygian, Hittite, Lydian, Urartu, Armenian, Assyrian, Byzantine, Seljuk and Ottoman civilizations, the eastern Van province is a bridge to ancient ages with its historical and archaeological riches. The Church of the Holy Cross on Akhtamar (Akdamar) Island in Lake Van is among the most brilliant and unique works of medieval Christian art. The church, which was built between 915 and 921, is one of the most important centers of Armenian history and continues to exist today thanks to detailed renovation and restoration works carried out by the Culture and Tourism Ministry.
Research and promotional activities have been carried out to increase awareness regarding the Akdamar Church and to make it known worldwide. In addition to a book containing all the detailed information about the church, architectural drawings and photographs, the most detailed digital work on the church has been compiled on the website of the church at www. akdamarchurch.gov.tr. On the website, available in Turkish, English and German, high-resolution VR videos were shot and 360-degree photographs taken from 14 various points were published for the first time utilizing the most recent technology.
The interior and exterior facades, reliefs and frescoes of the construction were, again for the first time, photographed from eye level and presented online on the website. Also, the magnificent natural view of Akdamar is presented to the website's visitors through İzzet Kehribar’s camera. The introductory film on the Akdamar Church of the Holy Cross, which was another phase of the introductory project, accurately reflects the magnificent grandeur and unique atmosphere of the church.
The glorious monument of Anatolia has now come to light with the photo exhibit in London. Among the participants of the show are Nikitas Eminence, the archbishop of Great Britain, Orthodox Armenians spiritual leader Değabah Sahak Bishop Maşalyan, Turkish Armenian Foundations Union President Bedros Şirinoğlu, Polycarpus Augin Aydın, Syriac Ancient Beyoğlu Church Board Chairman Kenan Gürdal, Lolita Asili İzzet Kehribar and Terry Katalan.
Last Update: Dec 20, 2019 2:05 am
RELATED TOPICS